Video of this song from youtube
Average Rating : 4.46
Total Vote(s) : 1376
Please rate this song between 1 star and 5 stars (5 stars being the best). Just move your mouse on the stars above and click as per your rating. Your rating will really help us to improve our website. 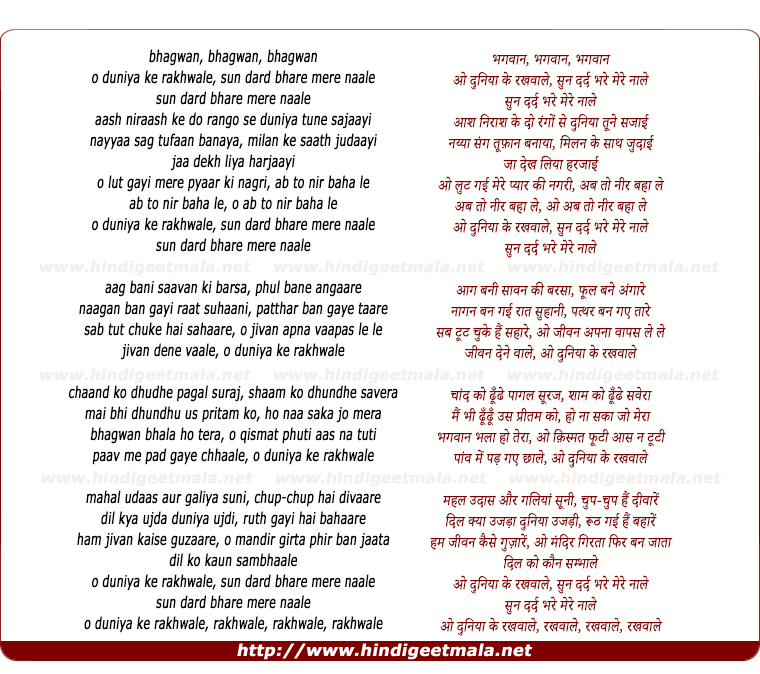 Comments on song "O Duniya Ke Rakhwale"
chakkar on Thursday, January 28, 2010
This is Rafi's greatest song ever. In the album "Aathvaan Sur", Naushad offers commentary on this song and it is insightful.

Nuashad said that Rafi-saab (or saheb) could not sing for three days after recording this song. Its composition covers a wide range of the raaga and, of course, multiple octaves. People, remember, this was recorded on one track, in one take (albeit after much practice)!

delicatekatie on Tuesday, December 30, 2008
Mohammad Rafi`s voice is simply voice of god,,,how many raagas he can sing in,,,he greatest singer of all time,,,,yes in movie beju bawra ,,,Baiju bawra proved he was greater than Tansen but not recognisation,,similarly Rafi sahab is greater than even baiju Bawra,,,,,or anyone for simplicity of his nature and godly voice,,,he is greatest without comparision as his voice is godly and what is godly is greater than all as god is greatest..Rafi sahab the genious,,
powerslavenegi on Sunday, April 26, 2009
Mohd. Raffi the greatest singer INDIA produced ever. Shakeel Badauni,Naushad and Raffi ji brought to life Baiju Bawara . The reason why these songs appeal and sooth us is because they imbody classical Indian music which was created for devotional prayers to the GODS .

Check out the Man tarpat song by Raffi ; it is actually the Raag Malkauns in Rig Veda said to be created by Goddess Parvati as a devotional prayer to Lord Shiva.

russel ahmed on Sunday, August 30, 2009
well tried brother and dont let criticizm affect u.look rafi is the
parameter by which other singers are measured..god was partial to him
...others can try and not match him...he is the best ...so u have
tried ur best and will continue trying .thats good because even the best
will find thye gems of rafi difficult to sing...


rahuldani14 on Friday, May 08, 2009
greatest song ever i heard they had to change the script to put it in this movie cause while Rafi was singing he started to bleed because it was such a heavy note, thats y its has that part where every1 starts saying he cant sing stop him. Supposedly that was the directors in the background. seriously touching song
View all 107 comments related to song O Duniya Ke Rakhwale
Popular Links on HindiGeetMala