Video of this song from youtube
Average Rating : 4.00
Total Vote(s) : 30
Please rate this song between 1 star and 5 stars (5 stars being the best). Just move your mouse on the stars above and click as per your rating. Your rating will really help us to improve our website. 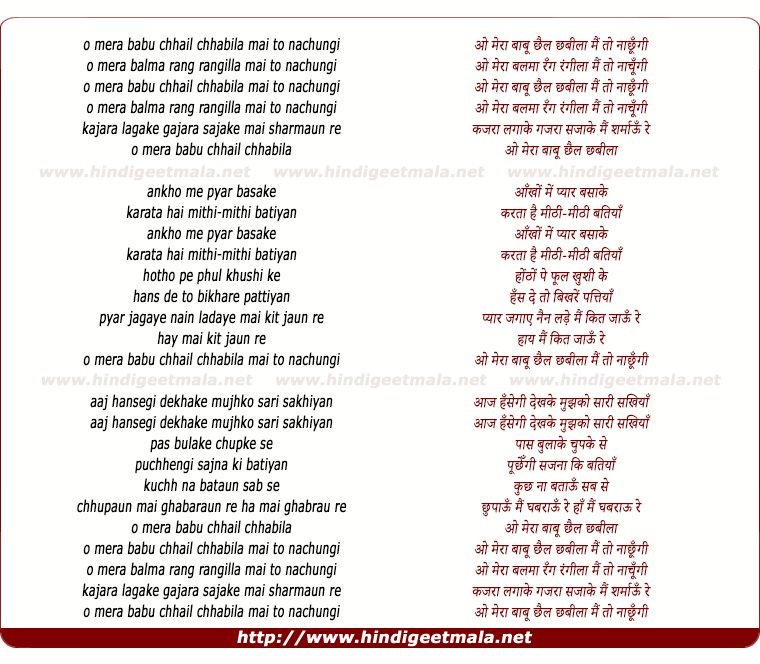 Comments on song "O Meraa Baabu Chhail Chhabilaa Main To Naachungi"
sabbirsa on Saturday, January 02, 2010
But then again they have prodeced brilliant films like Sholay, Mother India, Black, Main Tulsi Tere Angaan Ki, Baiju Bawra, Pyassa, Sahib Biwi aur Ghulan, Mughal E Azam, Umrao Jaan, Lamhe, Hum Appke Hain Kaun, Zubeidaa, chandni Bar, Kala Pathar, Deewaar, Agneepath, Devdas, Do bigha Zameen, and soooooooo many.
sabbirsa on Saturday, January 02, 2010
Jharna Basak even before joining Lollywood became a superstar with her first film Harano Shoor. So that is that. She did most of her work is Lahore but she was also right up there with superstars like Bobota, Kobori and so forth.
surataminchacha on Monday, November 24, 2008
Kiran jee is that true that shabnum went through all that jeopardy that is
written in the comments by poissondelamer plz say it is not true bcoz I
cannot bear it.

tarar786 on Saturday, December 15, 2007
The songs is from Movie named Mann ki jeet and It was shown on PTV in 1977 during Election transmission.
View all 25 comments related to song O Meraa Baabu Chhail Chhabilaa Main To Naachungi
Popular Links on HindiGeetMala