Average Rating : 4.37
Total Vote(s) : 1550
Please rate this song between 1 star and 5 stars (5 stars being the best). Just move your mouse on the stars above and click as per your rating. Your rating will really help us to improve our website. 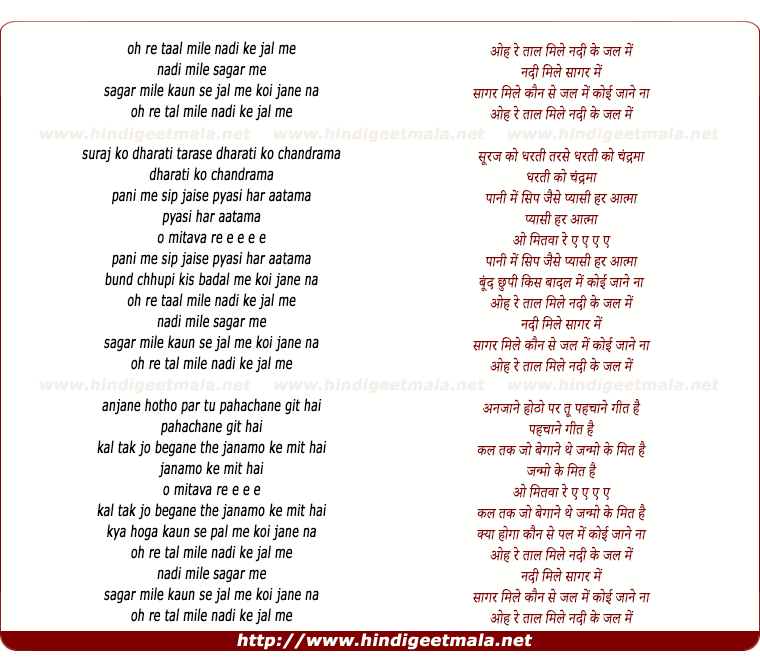 Comments on song "Oh Re Taal Mile Nadi Ke Jal Men"
biyer08 on Thursday, August 13, 2009
Life is full of mysteries and surprises. One moment you are downcast and hopeless and suddenly from somewhere a ray of hope appears amidst the dark cloud,a helping hand stretches before you and the entire course of life changes! This uncertainty of life is exquisitely depicted by "Kaviwar Indiwar" in this beautiful song in such simple yet effective words. Roshan's tune is rapturous and has a rustic aura about it. Mukesh's voice is full of pathos and touches the inner most chord of one's heart!
crazyoldsongs on Saturday, January 16, 2010
life's great philosophy penned by indeevar and adorned with the beautiful composition by roshan and sung with feeling by mukesh in his sweet voice .
Akshay Kumar on Saturday, November 07, 2015
ओहरे ताल मिले नदी के जल में, नदी मिले सागर में
सागर मिले कौन से जल में, कोई जाने ना

sankarmj on Tuesday, May 11, 2010
Another hit from yesteryear sung by Mukesh, and many time we were lucky to listen his voice in Calcutta.. He was so handsome ,his complexion and look was as like'n Englishman...
Sankar.

bewafaguy420 on Friday, December 26, 2008
thanks for posting!!! a very nice song indeed, this song was also sung by afghan musician "Ahmad Zahir" which become a popular song in the late 1970's lol before I was born.
View all 81 comments related to song Oh Re Taal Mile Nadi Ke Jal Men
Popular Links on HindiGeetMala