Video of this song from youtube
Average Rating : 4.54
Total Vote(s) : 94
Please rate this song between 1 star and 5 stars (5 stars being the best). Just move your mouse on the stars above and click as per your rating. Your rating will really help us to improve our website. 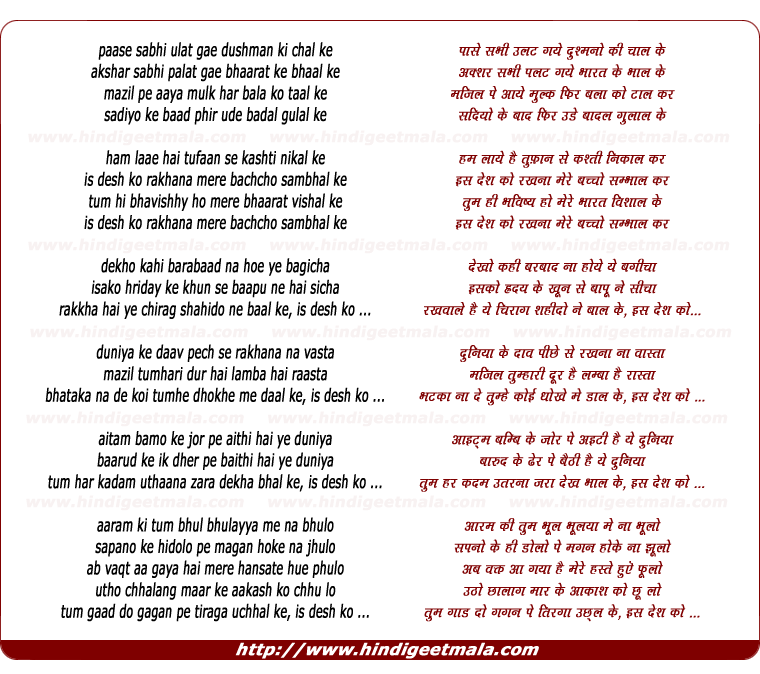 Comments on song "Paase Sabhi Ulat Gae, Ham Laaye Hain Tufaan Se"
Sholay48 on Tuesday, April 08, 2008
Compare the lyrics of this song to the story of most poor families. These
words wouldn't stop going through my mind on the day my mum died. On her
own, she brought all her children up. She did hard labour trying to earn
little money to feed us. She navigated her family through rain, storms and
shines. She eventually managed to bring her family safely ashore. We were
now grown up and there she was, lying dead. The message I was getting in my
head was 'I have fulfilled my duties. You do yours now'

vnr1945 on Wednesday, February 06, 2008
Thanks for the upload. Fantastic lyrics by Pradeep to the awe inspiring music of Hemant Kumar. Mohammed Rafi at his best especially in the last 'antara' where he goes from low to high pitch with amazing and unbelievable ease. A truly a great singer. In this film actor Abi Bhattacharya with his graceful and dignified acting immortalized the role of a teacher and set a benchmark which would remain unparalled in the Indian cinema for ever.
vnr1945

studer3500 on Friday, December 26, 2008
There will always be a certain degree of discrimination in any country,
look at the European states like the UK and the most powerful country in
the world USA. Incidentally they have less population than in India so I
don't think India is doing too bad on that front. This doesn't mean that
there is no room for improvement of course.

Dilip Kapasi on Wednesday, February 16, 2011
both nations should unite again as was prior to 1946..how about that? when
I hear people taking brides in India, when I hear about our leaders who
loot our people with wide open their hands, I say national radio in India
should sing this song every day, how about every hour.

aceji on Monday, June 01, 2009
ALL PEOPLE OF THE "SUBCONTINENT" are naturally HINDI. GOD made them HINDI.
Religion just devides.The land is called HIND. Jai Hind is best wishes for
all. Vande Matram is for ALL as the land is mother to ALL. Destroy hate and
promote LOVE.