Video of this song from youtube
Average Rating : 3.71
Total Vote(s) : 7
Please rate this song between 1 star and 5 stars (5 stars being the best). Just move your mouse on the stars above and click as per your rating. Your rating will really help us to improve our website.

Comments on song "Panchi Badal Premi Ke"
ShabanaAzim on Monday, June 07, 2010
@wizman009 ..Thats a silly comment, do we not form opinions on people the very first time we meet them??? Ofcourse we do! And however bad a day I am having I have never taken it out on an unsuspecting person! Also once you are in the public eye you have to put your own personal issues aside and address people with your public face, therefore I do not buy that silly excuse! I formed an opinon on her very young and very early, infact it was her who shattered that opinion when i actually met her!
ShabanaAzim on Monday, June 07, 2010
@wizman009 ...UMMMM!!! why should they get SPECIAL treatment??? And no I still disagree with your excuse. When meeting someone only ONCE you are bound to form your opinon based on that one instance! However I do not believe that my opionon of Sri Devi is a bad one. She just wasn't all that when I Met her, I am soo very glad I did now! No honey, just because they are on screen should not mean they are treated BETTER than anyone else. she got her chance and she blew it!! LOL!
ShabanaAzim on Wednesday, June 09, 2010
@wizman009 ... did I say she was bad???? Did I say anyone was bad??? I said she wasn't very nice to me!!! And that is just the plain truth! If I am not allowed to tell the truth anymore because someone might not be having a good day thats not right! Anyway, Thats your thinking and this is mine.
teenbauwa on Tuesday, June 01, 2010
@ShabanaAzim
Really? Never expected it from Sridevi. I am die hard fan of her and I have one friend who met her and said that she was very sweet. Another person I know through internet has got her no. and calls her on her b day and she too said that Sridevi is very sweet.

ShabanaAzim on Friday, June 04, 2010
@teenbauwa Yeah it is Sad, I guess the fame does go to their heads! But they forget we MAKE them.. and without US.. they are really nothing! Ah well, and I realised that what we see on screen is just acting... nothing more!
View all 29 comments related to song Panchi Badal Premi Ke 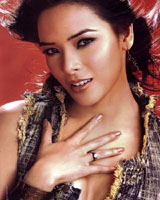