Video of this song from youtube
Average Rating : 4.45
Total Vote(s) : 425
Please rate this song between 1 star and 5 stars (5 stars being the best). Just move your mouse on the stars above and click as per your rating. Your rating will really help us to improve our website. 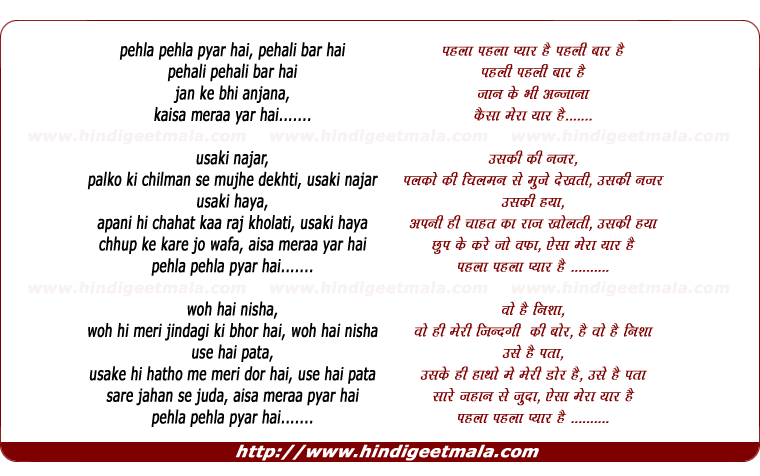 Comments on song "Pehla Pehla Pyar Hai"
onceinawhile123 on Sunday, June 14, 2009
Here is another one for ALL MADHURI FANS..What on earth made her sign movies like Rajkumar,Arzoo ,ye raste hain pyar ke etc. and leave movies like Ishq,Hum Dil de chuke sanam & Astitva??1.Was it sheer arrogance of her after her super success2.was it misguidance by her sycophants (read Rikku)?3.Was she afraid of being sidelined by Kajol in Ishq?
4.Did she wanted to lose weight which she gained during Koyla & Premgranth before signing any new movies.5. wanted to settle down and marry?6.Any other?

ragesh51 on Monday, January 03, 2011
When falling in love everyone things they are with safe hand, but when the good milk turn poison, it becomes too late to fend. It is easier said, in practical life, one cannot be calculative before falling in love, if that is, it is not love any more. I think failure is part of true love. The only faith that keeps failed folks keep going in theirï»¿ life is the belief that the other person will one day repent for their mistake. That is all it is needed.


teen21 on Friday, March 18, 2011
@sabna80 @sabna80 i agree w. u. madhuri is the most beautiful the most talented actress in the world. shes th best thing that has ever happened to bollywood. she does resemble madhubala.espeacially the smile. love madhuri and salman..perfect couple.

kenfigo07 on Tuesday, December 16, 2008
i love the choreography in this song starting from 2:44 until 4:05 ..i think its the best..man, you've got to love the dance move at 2:49, 3:02 and 3:15..and look at salman's face at 3:25..priceless!! salman is no doubt the best dancer in bollywood..the closest would be hrithik..
sallumaniaczka23 on Sunday, December 20, 2009
I love Salman in every movie
This is sweet song and they look very cute
Sallu have a lot of friends cauze He is very good so , I don't care what media says I love Him , He have a lot of people who realy and truthly love Him
Sallu forever :--)