Average Rating : 4.76
Total Vote(s) : 34
Please rate this song between 1 star and 5 stars (5 stars being the best). Just move your mouse on the stars above and click as per your rating. Your rating will really help us to improve our website. 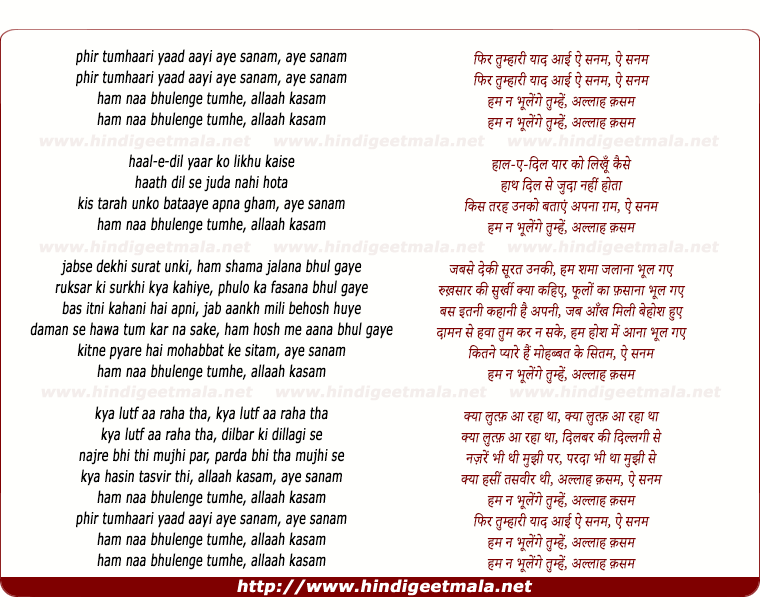 Jagjit Singh Ishar on Wednesday, February 24, 2010
no match 2 sajad sahib. nice & melodious composition. sajad has few films 2
his credit & has given marvellous music. a best mandolin player he was firm
self respecting man. in one of his film dalip kumar made sm remarks y
interfering in his work. 2 this sajad sahib badly scolded dalip kumar that
this is not his field & 2 mind his own business. dalip kumar had 2 eat a
humble pie. . this gr8 legend is no more with us. let his soul rest in
eternal peace. enjoyed the song. thanx 4 gr8 upload.

Narasimhan Srinivasan on Monday, July 16, 2012
hi while songs out here are excellent, pls. do not use them as an excuse to
take potshots at AR Rehman. Everyone cannot be a Naushad, but remember
Husanlal Bhagatram or Khemchand Prakash were replaced by Naushad, he made
way for Shankar Jaikishan, they made way for Laxmi Pyare. Etc. Tamil films
have been no different, for a long time K.V.mahadevan and Viswanathan
Ramamurthy or M.S.Viswanathan ruled the roost, they made way for Ilayaraja,
who has made way for AR Rehman. This is transition.

Narasimhan Srinivasan on Tuesday, November 13, 2012
Dear friend, surely musicians like Sajjad Hussain, Ghulam Mohd. are
immortal. But it is unfair both to compare and criticise A.R.Rehman. I like
both good compositions of today as well as cannot stop appreciating music
and songs of yester-years. Pl.remember A.R.Rehman did not get an
introduction but he burst into the music scene with very original and path
breaking score in the film Roja. He has held on to his high standards even
now. So he is as good as those before him.

Narasimhan Srinivasan on Thursday, November 22, 2012
thanks. it's ok. actually it is better to praise or criticize the composer
of the song we are listening to, according to quality of the composition.
Why waste time in comparison. Even then, sometimes it becomes unavoidable
because people like me cannot resist pointing out that Manna and Rafi being
trained in classical music could sing any kind of song, while many other
famous male singers couldn't do that. But that is another argument.