Video of this song from youtube
Average Rating : 4.50
Total Vote(s) : 172
Please rate this song between 1 star and 5 stars (5 stars being the best). Just move your mouse on the stars above and click as per your rating. Your rating will really help us to improve our website. 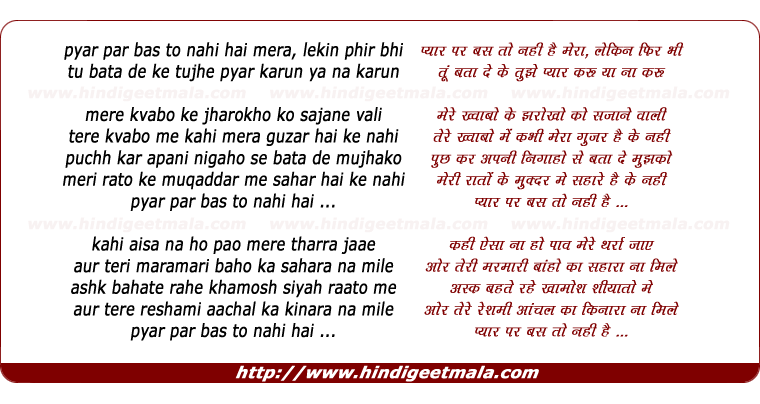 Comments on song "Pyar Par Bas To Nahin Hai Mera"
Ijaz Tahirkheli on Wednesday, November 24, 2010
Talat sahib singing one of his all time greats,poetry is just
wonderful,thanks for uploading this mastkalander sahib please upload
another of his MAIN PAGAL MERA MANWA PAGAL PAGAL MERI PREET RE. Talat sahib
is a singer who is not for masses but for classes,i think his ghazalz nd
geets songs r for ever.

Surender Bhutani on Sunday, June 15, 2014
The real composer of this amazing song is Khayyam Saheb who was compelled
to sell this tune to O.P. Nayyar. Khayyam was short of money at that
time.This was told to me by Meena Kapoor, wife of Anil Biswas.

ambindia on Saturday, February 20, 2010
the song consists of excerpts from sahir's long nazm, mata e ghair. 2 more
stanzas were recorded in asha bhonsle's voice but probably did not feature
in the film soundtrack. it would be excellent if someone could upload them
as well.