Video of this song from youtube
Average Rating : 4.37
Total Vote(s) : 3704
Please rate this song between 1 star and 5 stars (5 stars being the best). Just move your mouse on the stars above and click as per your rating. Your rating will really help us to improve our website. 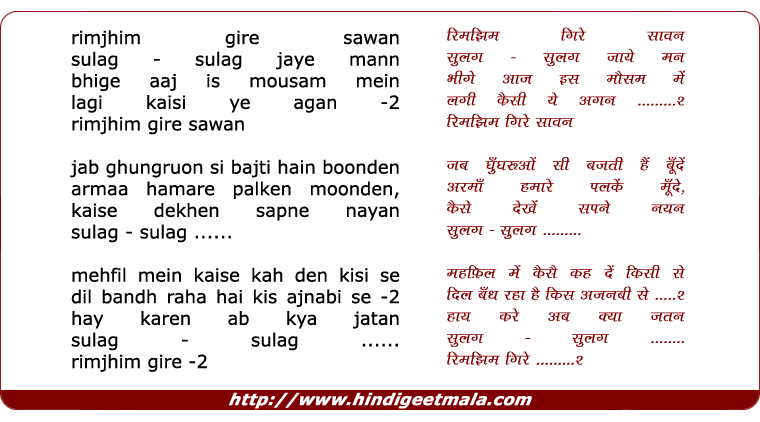 rahul sinha on Tuesday, March 04, 2014
Amitabh bacchan wish to work with Basu chatterjee and said dada mere liye
bhi kuch kar dijiye and thats how Basu chatterjee cast him for Manzil,after
a gap of 3years yogesh write song for R.D as some misunderstanding create
between two when one of the assistant of R.D in bengali told R.D that if
Anand bakshi write the song it will be better yogesh said see i understand
bengali and said i will not going to work with you pancham before R.D
explain him something,he already left the floor.﻿

abhiz999 on Sunday, June 10, 2012
WITH D VOICE OF A VOLCANO,RENDERING QUALITY TO THAT OF A MISSILE,EMOTIONS
TO SET THE WORLD DROWN IN TEARS AND VOCAL QUALITY TO THAT OF A
LION..CUMS INDIAS..WORLDS.GALAXYS BEST SINGER "KISHORE
KUMAR"...THE BEST WAS,IS AND WILL BE..NO OTHER MORTAL WILL BE EVER CLOSE
TO YOU "KISHORE DA".TILL D WORLD PERISHES U WILL BE
REMEMBERED...kishore da..you were,are and will remain a volcano of voice
which noooooo living voice can evn come close to...

syed abdul Razack on Wednesday, October 03, 2012
Kishore a verstaile singer of all time those days there were four legends ie kishore mukesh
mannday rafi they have diffrent talent in diffrent songs nobody now. They dominated more
than 5 decade but now one singer could not lost for 5 years all because of the western trend has made all the kachra songs without any meaning in those songs...

Venkatesh Iyer on Saturday, September 20, 2014
RDB gave a new lease of life to innumerable native/western melodies that
wouldve died unsung , by introducing them into bollywood music, in the
right situation and as always, incomparably orchestrated. apart from his
own excellent compositions , of course... music knows no boundaries... he
was , is and will always be an icon ﻿