Video of this song from youtube
Average Rating : 4.47
Total Vote(s) : 472
Please rate this song between 1 star and 5 stars (5 stars being the best). Just move your mouse on the stars above and click as per your rating. Your rating will really help us to improve our website. 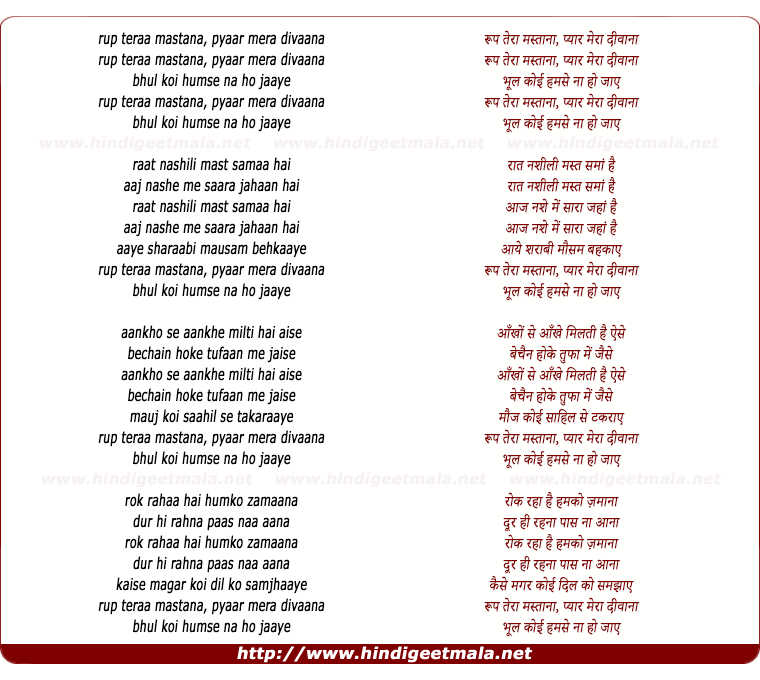 Satyen Naik on Monday, March 03, 2014
Belive me Today for the first time while watching this song on SONY Mix, I
realised that its in background. Since years I am listening/watching it. My
attention would always on Accordian & Saxophone played by Kersi Lord &
Manohar Singh. Its a myth that this song is composed by R.D.Burman.Fact is
it is composed by S.D.Burman. He was confused as to how to begin this song.
At that time Kersi Lord & Manohar Singh were just having fun with their
music instrument. S.D.Burman liked it. Thats how its opening music created.
﻿

nardnardn on Wednesday, December 07, 2011
It is said that RD was the one who made this song . He, the son of SD ,
was also the assistant music director of SD. The song has all the markings
of RD's music in it. Though SD and RD are so similar in their use of
musical instruments, RD's use of bongos and drums is subtly different from
SD, the sound is so pronounced of the drums. According to many sources RD
was the more creative of the two. Incidentally Madan Mohan is also another
assistant of SD. Both ,cases of chelas one up on guru.TNX

nawabshaukat on Wednesday, June 17, 2009
Actually this film was composed by a S D BURMAN All the songs were recorded
apart from this song because of his illness he was admitted in hospital
during that period RD said to kishore that he has composed this song for u
to sing but his father SD will get angry those were the dayz when RD used
to assist SD after listenining his composition they went to hospital
briefly described this happening SD smiled after hearing composition and
permit R D to record the song and rest iz the history