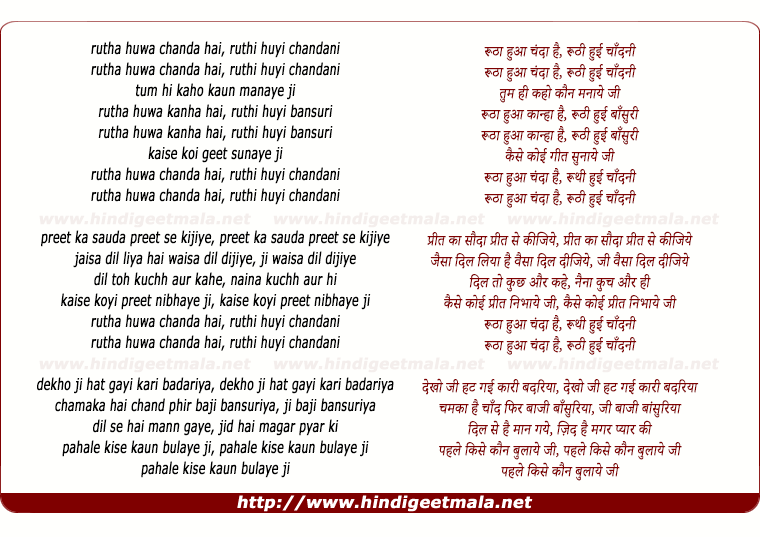 Comments on song "Rutha Huwa Chanda Hai, Ruthi Huyi Chandani"
amashaize amavasya on Monday, November 14, 2011
Even though I don't undestand the language it is not an obstacle to enjoy
these beautiful old hindi movie songs.But very sad to think about present
films and songs.They never have that heart touching nature but just come
and go.Hats Off for all the old Indian acters,actresses,singers,music
composers,lyricists,film directors for their great ability to entertaine
and live in the hearts of many generations.

kirti kumar Khanna on Tuesday, December 28, 2010
, do i really want to live in this present world. there is no anil sahib no
madan jee no roshan sahib and last favourit sajjad hussain sahib .i must
say this here one thing i really bow my head for a.r. rehman but whenhe
uses english orchestra behind a pure raga tune it really hurts he should
use sitar sarangi sarod

kirti kumar Khanna on Sunday, January 09, 2011
at one sreach i am listening this song for third time what abeautifull
composition and this saraswati ka roop lata lata lata

RituPM :) "StayWellWithin" :) on Wednesday, February 27, 2013
Lol ! :) What adorable lyrics of bantering in romance N a befitting
enactment by the charming DevAnand, & peppy Madhubala. :) Especially love
the poetic jest of the latter half of the last verse from 1:58. :) "Dil to
hai maan gaye zid hai magar pyar ki, - pehle kisey kaun bulaaye ji ? ! :)
Adorable song of a romantic tiff n tug of. love ? :) Superb was the
direction of such unforgettable Bombay films of yore, that sure are
classics depicting the beauty of human interactions that touch the core !

Nalini on Friday, September 14, 2012
Aaram 1951 movie has music by Anil Biswas, beautiful and refreshing indeed.
Convincing role played by Premnath, he gave a powerful performance,
sacrificed his love for Madhubala when he learns that Dev Anand and
Madhubala were both madly in love with each other. Durga Khote is veteran
actor, Manmohan gave a delightful hilarious contribution. Madhubala is
always impeccable, life of any movie regardless of how movie is fared by
viewers, she is perfect to a T. Madhubala is life of this movie.