Video of this song from youtube
Average Rating : 4.31
Total Vote(s) : 42
Please rate this song between 1 star and 5 stars (5 stars being the best). Just move your mouse on the stars above and click as per your rating. Your rating will really help us to improve our website. 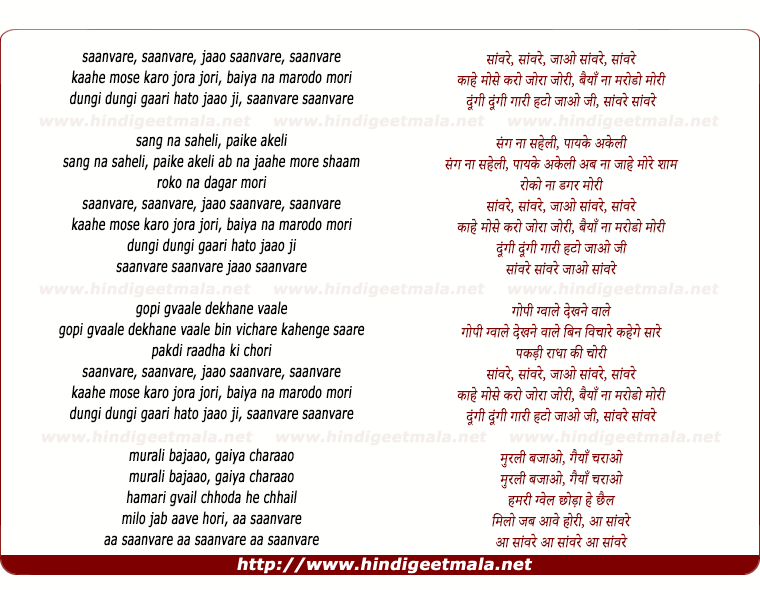 Comments on song "Saanvre Saanvre, Kaahe Mose Karo Jora Jori"
V. Siddhartha on Thursday, June 04, 2009
The finest of the finest Lata songs are her classical or semi -classical
numbers such as this one. This is a preeminent example of her sister Asha
describing her vocal ability as akin to a smooth waterfall going just as
gracefully in reverse-- upwards!( Diwanee3 actually quoted Asha's exact
words the other day). In addition , Suhanee, you have put in some of the
most charming images of our beloved stars, esp. of WR, MK, Nutan,
Madhubala, and Vyjayantimala. Enrapturing all around. Thanks.

V. Siddhartha on Tuesday, November 10, 2009
This is not just a great semi-classical song; it's a precious work of art
created by the famed maestro Ravi Shankar and our beloved Lataji for the
movie Anuradha starring the Indo-French star of beauty and elegance, Leela
Naidu, and my favorite male star Balraj Sahni( identifying image of my
channel !) See how the Lata prelude is followed by the extraordinary tempo
of the sitar and how that in turn shapes Laji's tempo. Musical crescendo of
the most sublime kind. Thanks, Suhanee.

crazyoldsongs on Friday, April 16, 2010
amazing images on an amazing song which never ceases to put me in awe ! you
have really described in the info about lata ji so beautifully and voiced
the thoughts of millions of her admirers . this is the rarest of the rare
pearls from all the priceless pearls of anuradha and a unique and
unparallelled song by lata ji . can anyone think of a better and sweeter
rendition by anyone except by our divine beloved saraswati incarnate !
thanks a lot for the precious upload .

jasbongy on Wednesday, June 10, 2009
Suhanee ji U have uploaded pictures of beautifull actresses. out of them i
have mat Meena ji,Vyajanti ji,Asha ji, Sadhna ji Simmi ji, Waheeda ji, Mala
ji,Nargish ji and Nutan ji. All of them very very beautifull and elegant,
but the most beautifull woman i have mat in my life is LATA JI.Whenever i
mat HER, i just forget the surroundings and jut pay my repect from far.