Video of this song from youtube
Average Rating : 4.63
Total Vote(s) : 32
Please rate this song between 1 star and 5 stars (5 stars being the best). Just move your mouse on the stars above and click as per your rating. Your rating will really help us to improve our website. 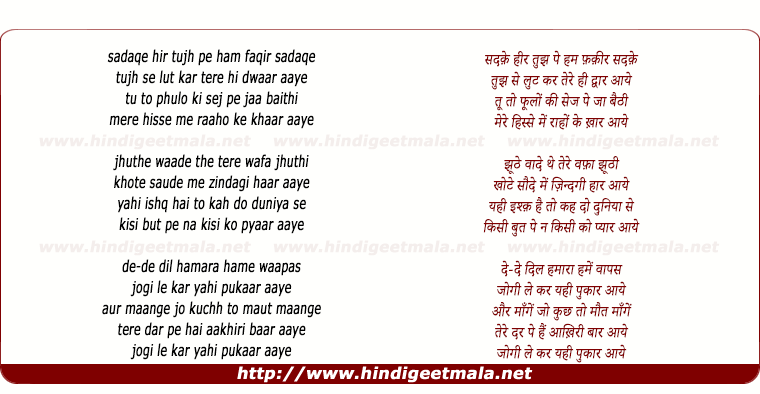 Comments on song "Sadaqe Hir Tujhape Ham Faqir Sadaqe"
mavirk on Tuesday, October 12, 2010
Did Raj Kapoor really edited out this song?
If he did, he did it for a reason: Raj Kapoor looks, moves and gesticulates like a poor parody of Charlie Chaplain. He is no Ranjha. He destroys the visual impact of the song just by spreading out his arms.

Having said that Raj Kapoor was a good movie maker, but acting is a gift which he did not have. He mimicked Chaplain in all his movies.

Listen to the song with a switched off monitor to appreciate the sound of Rafi.

prabhakara rao Edara on Monday, April 02, 2012
I have not seen this movie in 70s since it was stated to be failure. But
when watched this song in YouTube I have downloaded the movie to see.the
song & movie, only to find the deletion of this GREAT SONG and to
understand the reason for flop of movie. e.prabhakara rao.

vikramjeet1923 on Thursday, April 08, 2010
This song is ultimate and if it had been in the movie...the movie could have done more better...sung to its utmost best by rafi sahib...no one can sing this song better than him...he was a blessing to Indian cinema and music of Indian history.
abid malik on Wednesday, June 16, 2010
this song made me cry...wah Rafi sahab wah.duniya ka koi mai ka lal
nahin hai jo rafi sahab ki tara ga sake...if someone invents a machine to
measure voice...rafi sahab,s voice will be best in all singers...

Mrpkv1006 .pkv on Friday, December 10, 2010
Why rafi saab for this song. Simple, because no one in this earth could
have sung it. The high range and dard was quality of the genius that rafi
saab was, Add to that the best ever SJ. It has to be a treat