Video of this song from youtube
Average Rating : 4.17
Total Vote(s) : 4397
Please rate this song between 1 star and 5 stars (5 stars being the best). Just move your mouse on the stars above and click as per your rating. Your rating will really help us to improve our website. 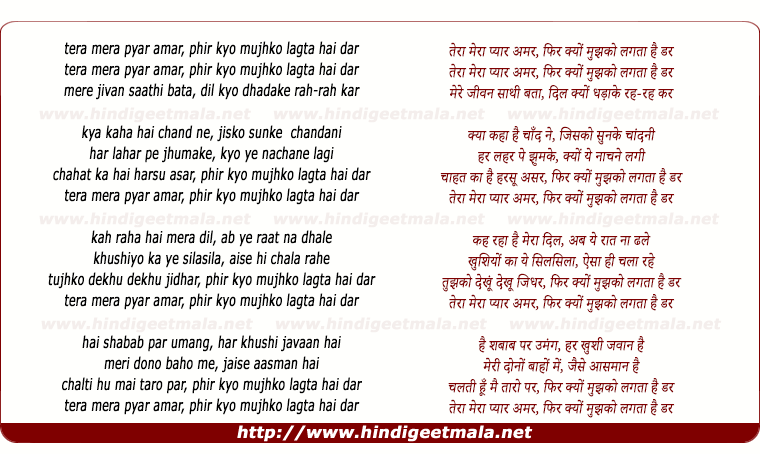 RituPM :) FEELThePurityPeace&DepthINMusicINYourShr on Monday, February 15, 2010
Oops! My deleted comment was actually meant for diwanee3's channel as I
mistakenly typed away merrily by her Vlog video!:) I did mean to come back
here though to let you know PremGatha how thankful I am for your beautiful
HQ upload! A fine Lataji vintage gem for us all to share in!:) Awesome
vintage appeal in this sweet romantic song with 2 of my favorites; charming
Dev Anand & beautiful Sadhna! LOVE their "sukh aur dukh" song too but
apparently it got taken down! Best Always! :) FEB 14th, 2010

passion689 on Monday, January 11, 2010
She surely is Sadhna, the one we know! I remember a picture of her which was like an arrow aimed at this mortal, instantly piercing through, taking away with her a chunk of soul but loosing it somewhere along her return path.lol! Do we know her star sign? Sadhna certainly was one of the beauties not many would resist. May she always be happy, healthy and prosperous in her life. Thx PremGatha, I like your channel and would love to subscribe, particularly following this high quality upload.
Tonynesa Frankalex on Friday, September 26, 2014
My God..i just cried seeing this sentimental song..this is what Hindi
movies were all about..love, romance, sentiments, family...what happened to
hindi movies? and seeing Sadhana here so simple, so beautiful in a saree,
flowers and a bun hair style..seeing the Late Dev Anand, the music..all
just takes my breath away..i thank God at least i was from an era that
still produced beautiful hindi movies which had beautiful and talented
actors. ﻿


Naveen Dighe on Tuesday, March 31, 2015
THIS HAUNTINGLY BEAUTIFUL LATAJI SONG GOT EMBEDDED IN MY MIND PRETTY EARLY
IN MY LIFE AT THAT TIME I DID NOT KNOW WHO HAD CREATED THIS GEM LATER ON I
CAME TO KNOW THIS SONG WAS CREATED BY THE SUPER TALENTED SHANKERJI
JAIKISHANJI AND THE TIME LESS GEM WAS WRITTEN BY THE GREAT SHAILENDRAJI
THANKS HALI MALI FOR THIS WONDERFUL UPLOAD ﻿