Average Rating : 4.42
Total Vote(s) : 284
Please rate this song between 1 star and 5 stars (5 stars being the best). Just move your mouse on the stars above and click as per your rating. Your rating will really help us to improve our website. 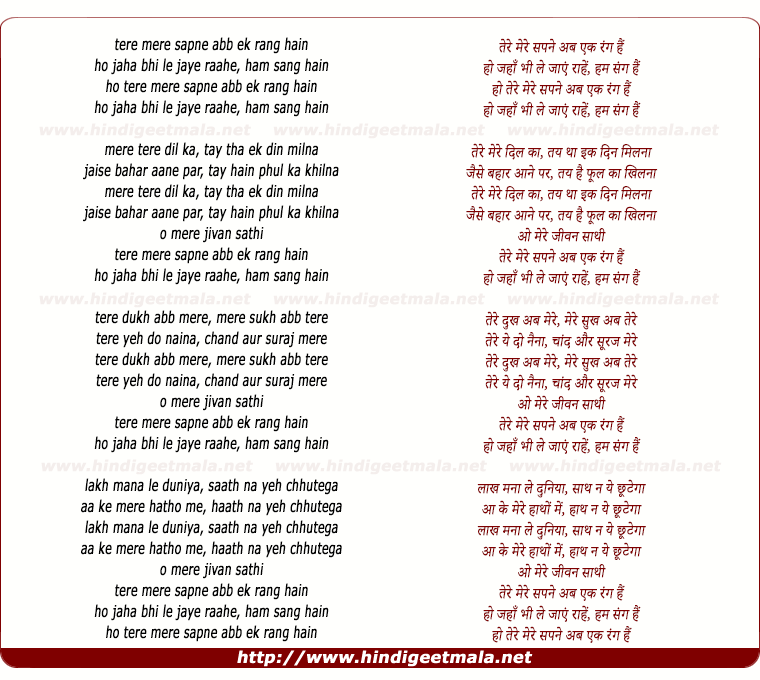 Comments on song "Tere Mere Sapne Abb Ek Rang Hain"
nawabshaukat on Thursday, August 27, 2009
MOHAMMAD RAFI SAAB he was amazingly gifted by GOD and something EXTRA was given to him by ALMIGHTY GOD for which we the HUMAN BEING are deprivred off Just like when PARENTS having their 5 or 6 children but they also DICREMINATES from their KITTY as far as LIKING AND DISLIKING iz concerned 033332604292
Rmehtacpa on Monday, August 23, 2010
This was one film that did not miss excellence on any aspect of film making from story, direction, music to even publicity in all modes radio, billboard/signs and everything, THOSE WERE THE DAYS some 45 years ago..
atulks on Saturday, July 31, 2010
Today exactly thirty years ago a versatile singer in his own right, Mohd. Rafi passed away on July 31, 1980. I have heard hundreds of songs sung by him, but the combination of Vijay Anand (Director), S.D.Burman (Music Director), Shailendra (Lyricist) and Rafi the singer made 'Tere Mere Sapne' from Guide my most favourite song and let us not forget Devanand and Waheeda Rehmaan on whom the song was picturised. It has some personal memories also.
MrRubbishness on Thursday, May 17, 2012
I agree. :( TGKS was the first movie where I fell for his good looks (He looks so handsome with that beret and coat! So debonair, great comic timing and soooo cute!). Goldie is a master at picturizing songs. When I watched Jewel Thief, his other name is Amar. And that means immortal. So before he died, I used to call him Amar (I did that when I sent him a tweet wishing him happy birthday). I always thought he'd be Amar. Oh, memories. :(
MrRubbishness on Saturday, May 05, 2012
I totally agree. Even in Johny Mera Naam he looked so handsome. And the 50's and 60's were gold mines! Everything - his scarves, his puff hairstyle, and all the awesome costumes that he had were just so charming. I love his earlier films like Nau Do Gyarah, Munimji, Solva Saal and Kala Bazaar. The list just goes on. :)

And add to that S.D. Burman's immortal music and Rafi's stupdenous playback, what more could you ask for? :)