Video of this song from youtube
Average Rating : 4.38
Total Vote(s) : 215
Please rate this song between 1 star and 5 stars (5 stars being the best). Just move your mouse on the stars above and click as per your rating. Your rating will really help us to improve our website. 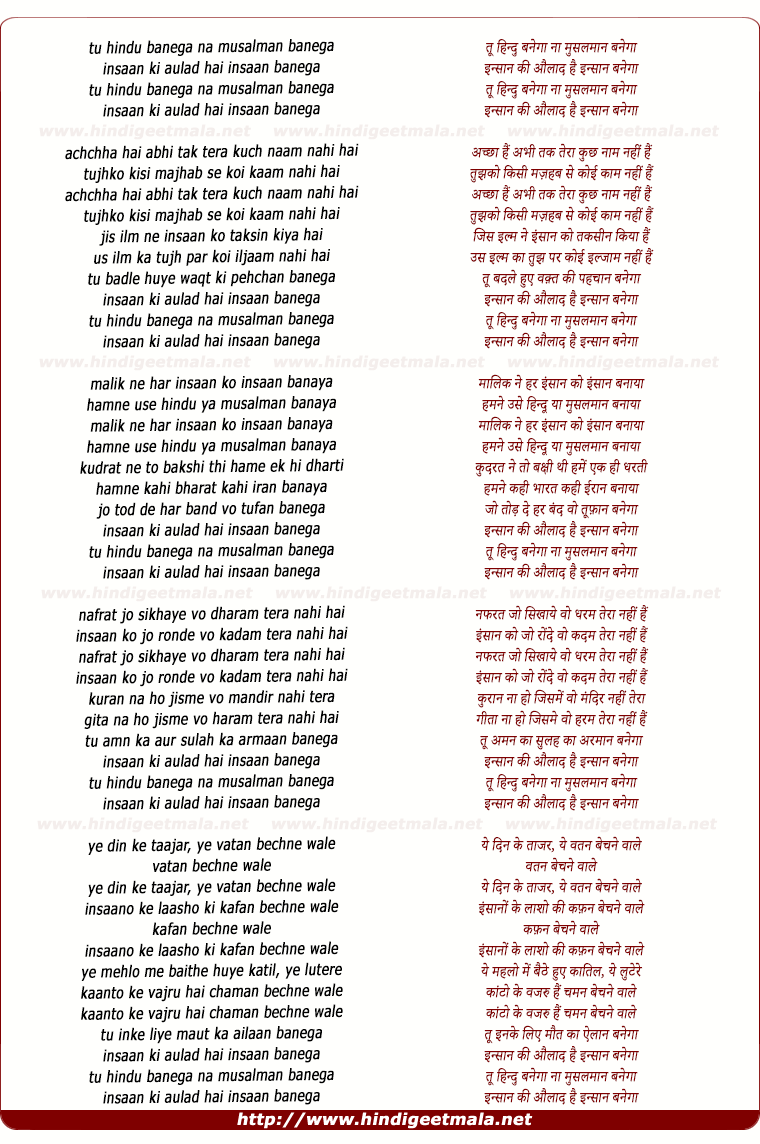 Comments on song "Tu Hindu Banega Na Musalaman Banegaa"
PONNADA SRINIVASPRASAD on Sunday, October 20, 2013
Mohammed rafi saab song is still relevant and always relevant and Hard core
militants, terrorists, extremists should understand and assimilate such
sane words and change for better, Mohammed Rafi has uncanny knack of
mesmerizing the Listeners AND even casual hearers get engrossed and become
attentive, other singers simply could not match his vocal power, Lata and
Kishore-Mukesh etc included. Indian Government, our Union Government has
failed to bestow honours on Rafi ji with Bharat ratna award.

ramaraksha01 on Tuesday, February 09, 2010
Moksha, Enlightenment is earned, not given or begged for, unlike Heaven.
That's the difference between the two. Getting to heaven is not that
difficult, all a pedophile or a terrorist needs to do is to grovel & beg
like a dog. He gets to enjoy a flesh-happy heaven while his victims live
thru hell. Moksha is earned thru knowledge, and knowledge has to be earned,
not given. A Teacher who gives pass marks to a failed student is not doing
him a favor. Reach for the Higher goal, reach for Moksha.

Pritpal Singh on Wednesday, December 16, 2009
beautiful song...it transcends religion and boundaries..make us become
open minded...and teaches religion of humanity.how can you fight in the
name of religion...how can you love god when you hate his creation which is
mankind..as kabir says ek noor te sab jag upaja kaun bhale ko
mande...who am i to judge others...i better look into my defects and work
on them instead of pointing fingers on others

om brahma on Sunday, May 25, 2008
I was answering the specifics of the question posed by Raj. I knew the word
in the song is refering to Mandir and Mosque or places of worship. I
believe it is Herr-um (very difficult to precisely spell for proper
pronounciation with English alphabets). I memorized this beautiful divine
song by Sahir, my favorite lyricist, more than 40 years ago. I am glad you
clarified it.

hk khan on Thursday, August 06, 2009
it is a song from a film. the story was that a young lady(malasinha as
actress) felt in love with a yung man. was a premarital child that was very
objectionaable in indian culture and in arabic culture unlike europeans. so
mala sinha was in problem but yet she loved that child and the song give
agood support to humanity above all