We will add it as and when it becomes available.
Average Rating : 4.36
Total Vote(s) : 208
Please rate this song between 1 star and 5 stars (5 stars being the best). Just move your mouse on the stars above and click as per your rating. Your rating will really help us to improve our website.


Comments on song "Tu Hindu Banega Na Musalaman Banegaa"
maxgraff on February 07, 2007
so true long live mohd rafi...long live gandhi
rakeshabha on February 11, 2007
So true. If all humanity can live by this edict.
paulsandhu on June 05, 2007
If only more people thought this way.
OneLovePunjabi on July 03, 2007
thank you much love and respect. Onelove = HUmanity
man from philly on July 13, 2007
i don't get you?
FairyAngel9 on September 18, 2007
such beautiful meaning.old times...old songs...awesome songs
Onelove= Humanity!!!

yellayi rajesh on October 20, 2007
Whatz The Purpose of Religion if it has to be against Humanity or deosnt
serve Humanity. Why cant we follow someone Like Sant Kabir?

gorapup on April 06, 2008
Sweet song..
samdick014 on May 12, 2008
hi am from mauritius i listen this song quite a very long long time , i really like the words but i don't realy understand the whole words . this is really a message from God for people who like division in nation , in cast
om brahma on May 25, 2008
I was answering the specifics of the question posed by Raj. I knew the word
in the song is refering to Mandir and Mosque or places of worship. I
believe it is Herr-um (very difficult to precisely spell for proper
pronounciation with English alphabets). I memorized this beautiful divine
song by Sahir, my favorite lyricist, more than 40 years ago. I am glad you
clarified it.

om brahma on May 25, 2008
Bullhayshah, you are a good man. You like good things in life as I do. Keep
it up. I just got done listening to Allahoo by Nusrat Fateh Ali Khan. I
experience Jannat.

pali1981 on June 25, 2008
best song.. so relevant to today's society
alternativethinker on September 11, 2008
Yeh it si a vnice song and a graet teaching. But the whole world has sunk
in the dark but i altleast wished that the south asia would stand a bove
from this darkness but i am merely disappointed

alternativethinker on September 12, 2008
I just listen everything that touches my heart and has good tune and good
words. We necesserily not to be convinced by our religion when we listen
music. WE listen it if we like we dont listen if we do not like this

Bullhay Shah on September 12, 2008
Well said Tanx
alternativethinker on September 13, 2008
Thank you too. Yu said also good
Shivanathuni Satyanarayana on September 14, 2008
This very good song, Salute to all who contibuted for this... Old is Gold,
either in songs or whatever... Hope it will enlighten so called
fundementalists and making todays' life miserable.

alternativethinker on September 17, 2008
You are talking nonsense. do you know what does mean fundamentalists?The
people who believes in religion is all fundamentalists. Fundamentalism is
not bad bad is extreamism. If yu could differ these two words then you show
wisdom if not then yu r the same as those fundamentalists as you say.Look
the people has mixed everything in thios world lies and truth
,fundamentalism and extremism right and wrong and now everywhere is chaos .

Nisha Sachdeva on September 17, 2008
Sahir was not only a great poet but an even greater thinker. His depth of
thinking was far ahead of his times and deserved a Nobel prize. The words
of this song were never more relevant than they are today.

shally420 on November 11, 2008
The lyrics of this song is best.
AfghanTune on November 23, 2008
What a great mind that made this poem and how great Rafi Saaib, who just
gave live to it!

Shivanathuni Satyanarayana on December 22, 2008
Nonsense or may have some sense... but the result is same as you said in
last statement... U used different words or I might used softer word...

azmatkarim2002 on January 11, 2009
Just lost respect for Mohammed Rafi
giggles1987 on January 26, 2009
awwe what a cutieee!! (baby) this song is so nice =)
manavlk on March 29, 2009
What a song. This was what the founding fathers of our country wanted our people to be but look at where we are. I feel sad for where have come. God bless the creators of this song.
vrsred on May 03, 2009
Great song..so meaningfull words...and Lyrics!! Love it..
azmatkarim2002 on June 01, 2009
Islam is not your dad's trousers. It has rules and a Book. Either follow it or get lost!
AksheeShadow on June 04, 2009
and isnt that weird that after a book and some rules u can disrespect human
or go against someone who did nothing to u or has no intention to??
Religion was to give humans a direction , if it doesnt provide that its
useless. Humanity came before anything even before prophet mohammed was
born. think about it


Kay Cee on July 18, 2009
Wow, how Rafi goes up and down the pitch almost with a robotic control!
Marvellous song that it is! A teaching aid indeed both in lyrics and in
singing. Kanwal

qiron on July 22, 2009
Well said Bro. I wish this planet had more folks like you, it would have
been a much better place :) Keep up the positivity and grace my dear.

hk khan on August 06, 2009
it is a song from a film. the story was that a young lady(malasinha as
actress) felt in love with a yung man. was a premarital child that was very
objectionaable in indian culture and in arabic culture unlike europeans. so
mala sinha was in problem but yet she loved that child and the song give
agood support to humanity above all


humayun khan on August 08, 2009
in this modernday everybody is terrorising everybody. but talibans are
least terrorists in comparison i think .lol

krishnankn on October 31, 2009
achei insaan is not exclusive to any religion. such comments are demeaning.
abdulismailzumla on October 31, 2009
God has made everything and everybody out of love. who am i not to love all
His creation? it is my duty and for my benefit to do so. the word to this
song should be wriiten down and read everyday and reflected upon in order
to reset our thinking and to be guided on the correct ways

abdulismailzumla on October 31, 2009
spot on. please read my reply to honeyhonish posted a week ago. best
regards and wishes to all 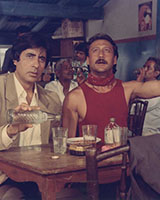