Video of this song from youtube
Average Rating : 4.42
Total Vote(s) : 128
Please rate this song between 1 star and 5 stars (5 stars being the best). Just move your mouse on the stars above and click as per your rating. Your rating will really help us to improve our website. 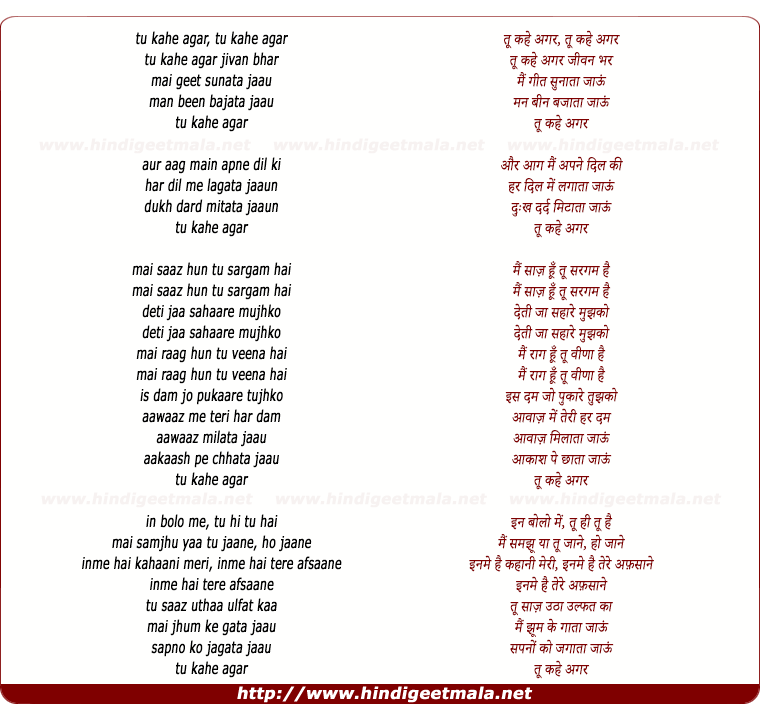 Comments on song "Tu Kahe Agar Jiwan Bhar Main Geet Sunata"
Hussain Al Sajwani on Saturday, February 13, 2010
Dilip once was a natural actor. I would advice those who want to learn
about acting to watch him in Mughl-E-Aazam and Devdas, Andaz.He was the
best actor Bollywood has ever produced. Compare "Comparison is insidious"
him with Amitab Bachhan in Shakti. Watch him in Andaaz how natural he is
when Nargis reveals to him that she loves Raj and he remembers what she had
told him. Watch the sadness on his face. It looks real. Watch him in Daag
when he drinks and sings "Ae mere dil kahin aur chal"

Bajaury on Friday, June 01, 2012
Raj was a director, good! I am not sure. The success of his films was some
superb music by Shankar Jaikishon. They produced some outstanding melodies.
As actor RK was very annoying by his antics. Personally I liked him. He was
a good man. Interestingly Raj's family lived not too far from the Yousaf
Khan's in Peshawar. Yousaf Khan family moved to Bombay to sell fruits and
Prithvi Raj to try in the film industry. Both became prominent. Both
contributed immensely to the Indian culture.

greatmaan on Wednesday, April 01, 2009
Dilip Kumar became the KING after Andaz and to date remains the man whose influence, excellence, standard of performance, respect and brilliance is unsurpassed and untouched. Many great actors came after him, and in one movie or another displayed excellence in their respective roles... but after having watched every actor closely, the critics, masses and the actors themselves acknowledged him as being the best there can be.
greatmaan on Wednesday, April 01, 2009
"I want my idol Dilip Kumar to know I consider him the ultimate actor before its too late. Ive sent a poster of Ganga Jamuna to be signed by Dilip Saab" - Kamal Hassan
" Dilip Kumar is my biggest inspiration" - Raaj Kumar
Rajendra Kumar and Manoj Kumar felt proud when people and critics said them as clones of Dilip Kumar.
" I am an actor because of Yusuf Sahab" - Dharmendra

Mulakush on Tuesday, January 12, 2010
I have never like Dilip Kumar's acting. He could only act himself and was
never able to project the character he was cast in. He was famous for being
famous, not for any talent that I can see - an abysmal professional. Mukesh
was a true naturally talented singer and lent his wide ranging voice to
numerous songs that live to date.