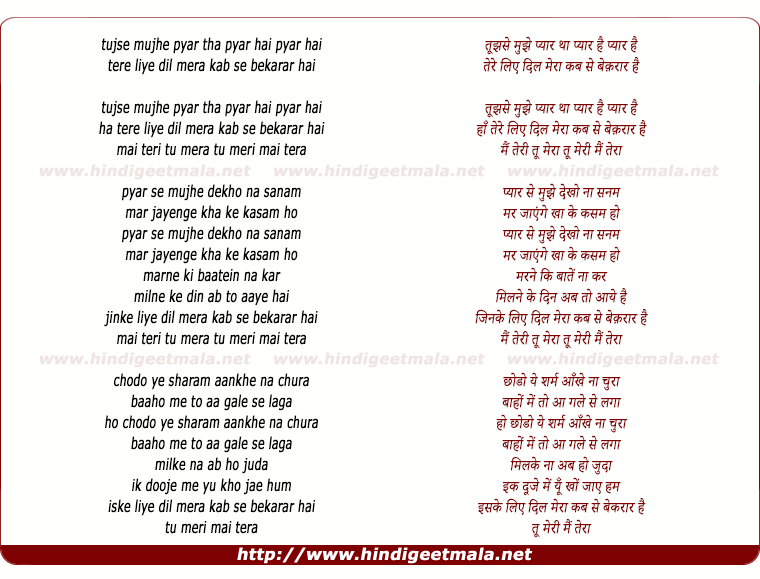 Comments on song "Tujh Se Mujhe Pyar Tha"
david benley on Friday, January 20, 2012
@l0veudivya my mistake but i don't know who is diviya, i only started
watching bollywood films 6 years ago and sridevi got me into movie. i just
asked one of sridevi fans who divya is and they say divya became popular
because she was sridevi duplicate. and sridevi does not need tons of
makeup, she has beautiful skin, most beautiful eyes i have ever seen and
perhap the best ever hindi actress. she did plenty films without makeup and
she looks the same.

david benley on Saturday, January 21, 2012
@l0veudivya every actress has to wear makeup, madhuri had a bad face
condition with acne and scars, so wearing makeup covers it, sridevi look
beautiful naturally without make as those eyes makes her look exceptionally
goddess durga. Sorry i didn't know much about divya, but i don't see ur
probs with sridevi, sridevi is favourite actor to many well known
personalities, she was a legend who made a huge impact and 1st female
superstar.

david benley on Saturday, January 21, 2012
@l0veudivya i told u sridevi does not need to wear makeup, she didn't wear
makeup in chaalbaaz other character or in sadma.

l0veudivya on Friday, January 20, 2012
@Pitvp2 She was definitely not a Sridevi duplicate. Sridevi has a very
small face, a very small nose (thanks to surgery), dark black hair, dark
black huge eyes. Divya has brown hair, brown big eyes, a very round face,
chubby cheeks and a bigger nose. Some people do say that the resemble, but
that's again what I said. During the early 90s (when Divya was popular),
she did resemble Sridevi who was wearing tons of make up at that time. I'll
send you a picture.

l0veudivya on Saturday, January 21, 2012
@Pitvp2 I didn't say no other actress wears it. Could you please stop
pretending that I said something which I didn't? I like Sridevi myself, I
don't have a problem with anyone. I was just saying that Sridevi looked
similar to Divya in the early 90s when she wore A LOT of make up. I didn't
judge it, I just said the fact. Without make up, Sridevi does not look like
Divya, period - end of this discussion.