Video of this song from youtube
Average Rating : 4.19
Total Vote(s) : 1430
Please rate this song between 1 star and 5 stars (5 stars being the best). Just move your mouse on the stars above and click as per your rating. Your rating will really help us to improve our website. 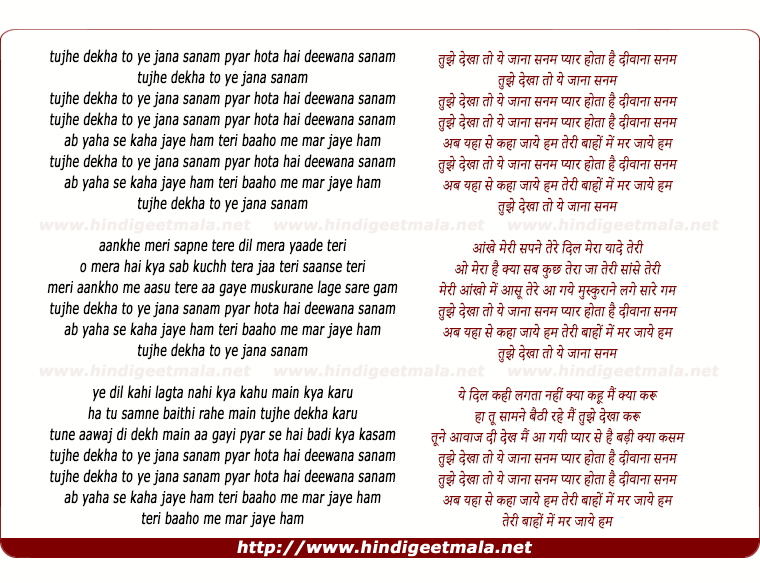 Comments on song "Tujhe Dekha Toh Yeh Jana Sanam"
thestrangeruknew on Wednesday, August 26, 2009
Dear Yrf, If you don't have the guts/intentions to put up the complete
videos, please, avoid it altogether next time. Those who like the songs and
videos that you have copyright off, already have 'em with them, or they can
get them from other sources. So a humble request, please, next time, don't
bother. Sincerely, Amanpreet Rai

safi4lyfe on Saturday, April 23, 2011
I luvvvvvvvvvv him so much!!!!!! it's just da way he acts dat charmz people!!!! Y doesnt he make movies like dat noww???? now all those directors tell them 2 act out sh*t!!!! it's never a good luvv story anymore!!!!!! I luv u SRK!!!! ohhh yeah!!!!! him and kajol shoulda got married!!!! da best indian cuple ever!!!!!!
yessss26 on Sunday, April 24, 2011
usse dekh ke raj ne yeh kyun jaana ki pyar diwaana hota hai? does he think that he shouldnt have fallen in love with simran because its not possible to be together? is that why pyar is diwaana (crazy)?
intelintel06 on Monday, October 25, 2010
Translation for @jsacore..After seeing u i came to know that love is crazy.I don't want to go anyplace else now.i want to die in your arms .
ManishS19 on Monday, March 21, 2011
@mehadi91kochotmail When I saw you, I realized love is crazy. Where do we
go from here? I'll die in your arms, darling. First Paragraph.