Video of this song from youtube
Average Rating : 4.29
Total Vote(s) : 138
Please rate this song between 1 star and 5 stars (5 stars being the best). Just move your mouse on the stars above and click as per your rating. Your rating will really help us to improve our website. 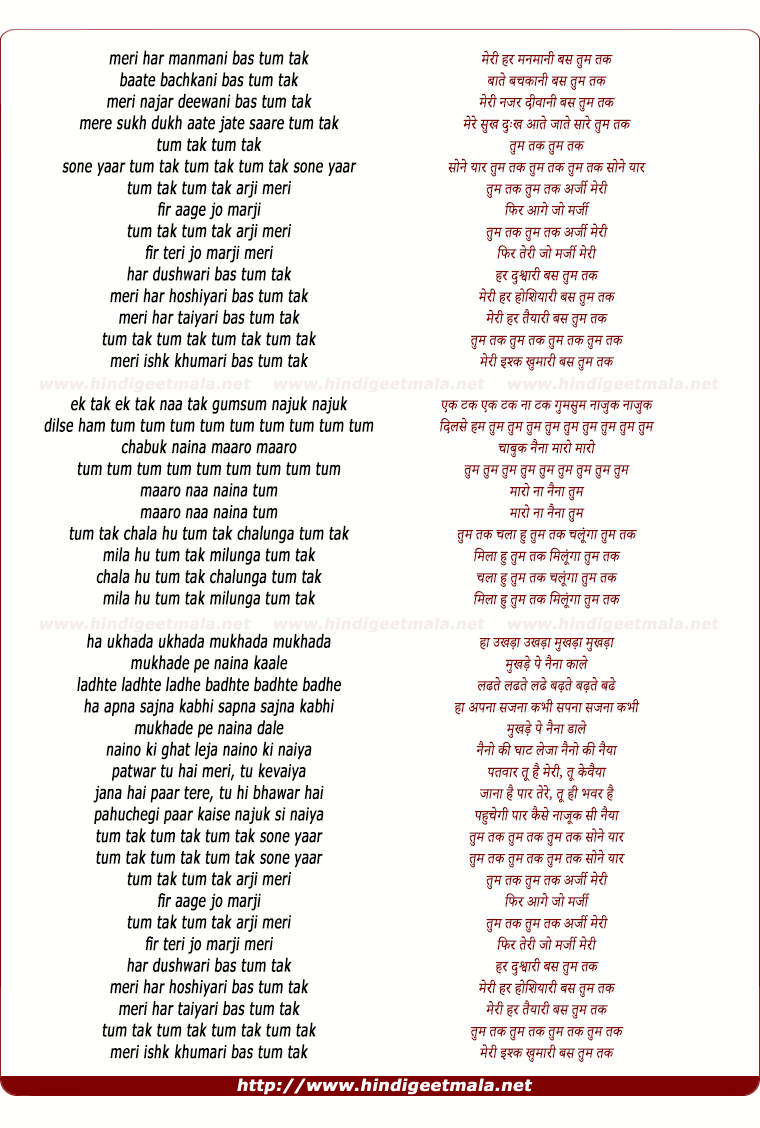 Comments on song "Tum Tak Tum Tak"
Kishore Bhatt on Monday, May 06, 2013
Nice to see Dhanush in a Hindi movie...he's been in the industry for 10
years from now...its really a great achievement for an actor who has
started from scratch.though his elder brother was a director, he has
really worked hard for his place which got him the National award for the
tamil movie 'Aadukalam'...really want this movie to be a commercial success
and hope people from Bollywood would recognize the fact that even South has
got good talent...and let the north-south divide vanish..:)

Music Lover on Friday, May 10, 2013
I totally agree! Hindi people don't like the look of Dhanush because
they're not Tamil like us.. but we feel the same towards hindi people as
well!..no offence but we do accept that Bollywood actors are one of the
best, talented actors in the whole world! So u guys gotta except us
Tamilans for our Talent as well! Dhanush is the first National Award winner
out of the recent actors in Tamil And we will clearly 'kill'u if u say
anything about Dhanush as the same as u will do with ur fav star :)

Raudra Prema on Tuesday, June 11, 2013
If a person commits crime, like a murder - would you encourage him into
your home?nope , right. So, as per principle.If the incumbent kill animals
and drink their blood, others have the right , not to encourage you in
their homes.If you dont live like and animal, you wont be called an
animal.Its as simple as that. Examples of Shudras who have elevated their
principle of learning, not of birth - Vyasa and Valmiki. You are talking
about birth, I am talking about principle.Get it?

Sandeep Sarkar on Saturday, May 11, 2013
Agree! Someone really needed to bring back the lyrical intensity in
Rahman's works, something that had been taken for granted for quite
sometime now! The last few times I heard memorable lyrics in a Rahman album
were Dil se, Swades, Rang de Basanti, Delhi-6 and Rockstar. Irshad worked
wonders with Rahman in Rockstar and going by the flashes of the 2 songs in
Raanjhanaa I've heard so far, they seem to be making history again! :) I'm
certainly not complaining!

banabuseid on Sunday, May 26, 2013
No offense just bringing up a discussion. Kamal Hassan, Rajinikanth are
beyond boundaries where not telugu actos have come closer to accomplishing.
Andhra Movies are good. But only appeal to telugu people. Exceptions only
Rajamouli. Tamil Cinema has brought out better talent in the likes of A R
Rahman, Mani Ratnam, Shankar etc who are on par with anyone else India has
every produced and appeal to a farther audience. But I respect your comments