Video of this song from youtube
Average Rating : 4.68
Total Vote(s) : 28
Please rate this song between 1 star and 5 stars (5 stars being the best). Just move your mouse on the stars above and click as per your rating. Your rating will really help us to improve our website. 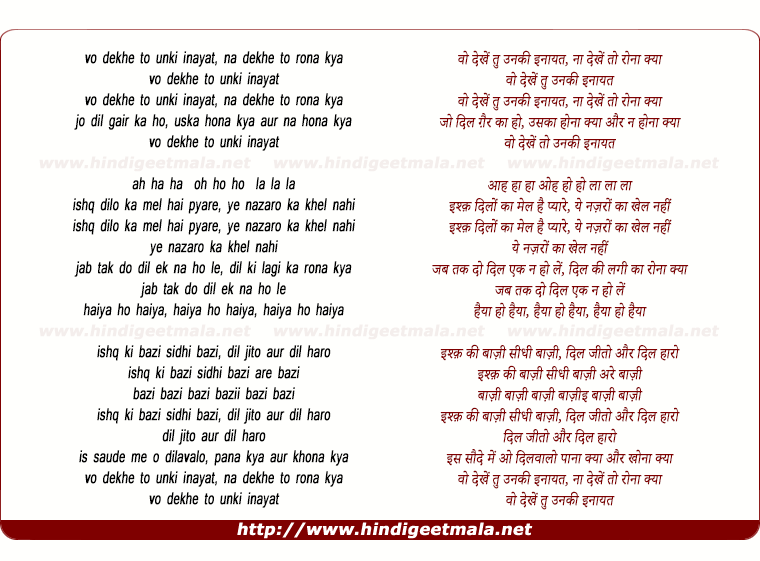 Comments on song "Vo Dekhen Tu Unaki Inaayat"
Bharat Gul on Thursday, December 13, 2012
Very enjoyable duet. Another example of comedy and melody being blended
smoothly in a song, with KK's part in the song showing a few
classical-style flourishes as well.( Notice those full lips of Sheila
Ramani. Today some women seek them through collagen injections).
Thanks,COS.

crazyoldsongs on Thursday, December 13, 2012
i really loved KK's rendition from 0.55 and AB also ofcourse sang very well
. KK's early voice sounds good in this song ! i don't seem to be familiar
with this song before but when i saw it i felt i should post it as it was a
bit different . ! i am glad you enjoyed it . !

Priya MyMusicalHeaven on Monday, December 31, 2012
Love this humorous song! Although a less-known song, it is one not to be
missed. Debonair Dev Sa'ab was the heartthrob of many in those times, and
is quite entertaining in this clip. However, the award goes to the 'other'
guy, in my humble opinion, lol.

crazyoldsongs on Thursday, December 13, 2012
you are right ! i remember sahir mostly for his serious poetry and this is
indeed an example of his lighter side which he also showed in a few songs
he wrote for ''munim ji '' thanks a lot . i am happy you enjoyed the song .
!