Video of this song from youtube
Average Rating : 4.50
Total Vote(s) : 3777
Please rate this song between 1 star and 5 stars (5 stars being the best). Just move your mouse on the stars above and click as per your rating. Your rating will really help us to improve our website. 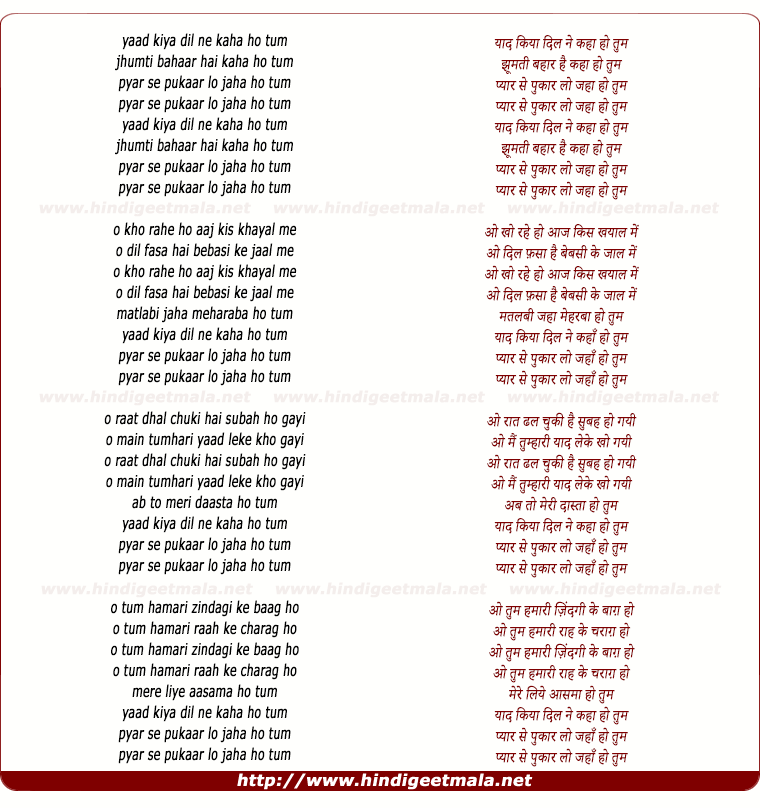 Devanand is with Nalini Jaywant ,most beautiful lady before Madhubala rose to that level.

P Vijay on Friday, February 24, 2012
Very melodious song from Hasrat Jaipuri and Shankar-Jaikishan from 1953
film Patita; I had heard this one when I was 14 years old and now that I am
72, this sounds as sweet as it sounded then ; I wonder who gave the music
to this song; was it Shanker or Jaikishan? I certainly would like to know.
It is said that immediately after signing the film, they used to divide the
songs and then never interfered in each other’s compositions. Even after
good seventy years the sweetness has not diminished.

Zil Hasnain Kazmi on Saturday, February 19, 2011
I would salute to Hemant Kumar´s courageous step to enter into singing
arena. He knew exactly that his voice was just as normal as one could
imagine. What persuaded him to proceed because of his bank with full of
compositions. And so much so, Lata Mangeshkar, an authority and stablished
singer at that time could not refuse him. What a legend? He has scored
beautiful duets with this nightingale.This particular song is one of them.
It is pleasure to listen to such great performer. (19 02 2011)

Vinod Bhatia on Wednesday, January 18, 2012
Really a magnificent song with beautiful voices of Lata Mangeshkar and that
very rich soft voice of Hemant Kumar.I was only eleven years old when I
used to hear this song on All India Radio. I am now seventy one years old.
I used love this song then and I still love it now. How time has been
running away with such fast speed that it has been leaving everything
behind but my old memories have still not faded away.They are still fresh
as they were then. Time could not take them away from me.