Video of this song from youtube
Average Rating : 4.43
Total Vote(s) : 215
Please rate this song between 1 star and 5 stars (5 stars being the best). Just move your mouse on the stars above and click as per your rating. Your rating will really help us to improve our website. 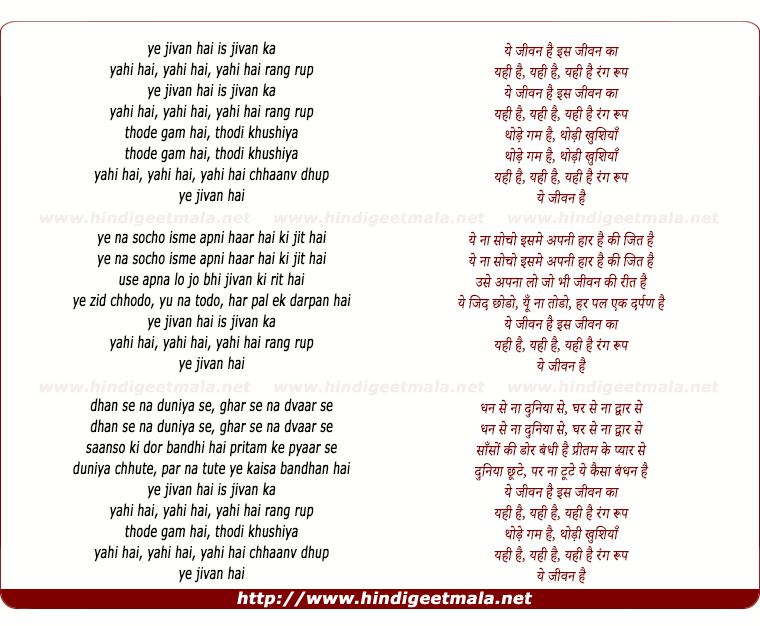 Comments on song "Ye Jeevan Hai Is Jiwan Ka, Yahi Hai Rang Rup"
gisellejensen on Sunday, July 05, 2009
Second class? With all due respect, this is the first time I've encountered the words "second" & "we" [Indians] in the same sentence. I am not Indian myself (I'm actually Middle-Eastern), but the culture & substance that Indian films -- &, to be frank, India as a whole -- has always provided with the best of the best in life possible, whether it is via education, innovation, culture, values, art, et al. My utmost respect to anyone who is Indian!!! I hold nothing but positivity for "the desh."
abhiz999 on Friday, August 03, 2012
WITH D VOICE OF A VOLCANO,RENDERING QUALITY TO THAT OF A MISSILE,EMOTIONS
TO SET THE WORLD DROWN IN TEARS AND VOCAL QUALITY TO THAT OF A
LION..COMES INDIAS..WORLDS.GALAXYS BEST SINGER "KISHORE
KUMAR"...THE BEST WAS,IS AND WILL BE..NO OTHER MORTAL WILL BE EVER CLOSE
TO YOU "KISHORE DA".TILL D WORLD PERISHES U WILL BE
REMEMBERED...Hail King of all times.Had u taken birth out side am sure evn
Charlie Chaplin would have bestowed you the tag of a GENIUS.

gisellejensen on Sunday, July 05, 2009
Great, homely, enjoyable film this was, by the genius that was Basu Chatterjee -- one of India's greatest & my personal favorite directors ever. There is one advice that the director had intended for the audience to leave home with: that marriage is about compromising, for without it, only selfishness & arrogance will prevail -- that, & the fact that Mumbai houses really ARE expensive (confirmation to what I've been told all this time) ;)

Grade-A upload -- many, many thanks!!

Pepe Chareetur on Tuesday, February 22, 2011
Both Rafi and Kishore have sung great songs. So have Mukesh, Mahendra
Kapoor and others. You can't pick who is better between Kishore & Rafi.
Same applies to Lata Mangeshkar and Asha Bhonsle. Shankar Jaikishan,
Laxmikant Pyarelal,Kalyanji Anandji, RD Burman, Madan Mohan, Ravi among
music directors. Shailendra, Anand Bakshi,Shaheer Ludyanvi, Majrooh
Sultanpuri, Indivar... ...and many others among lyricists. Everyone
contributed and they were all very good.