Video of this song from youtube
Average Rating : 4.43
Total Vote(s) : 2001
Please rate this song between 1 star and 5 stars (5 stars being the best). Just move your mouse on the stars above and click as per your rating. Your rating will really help us to improve our website. 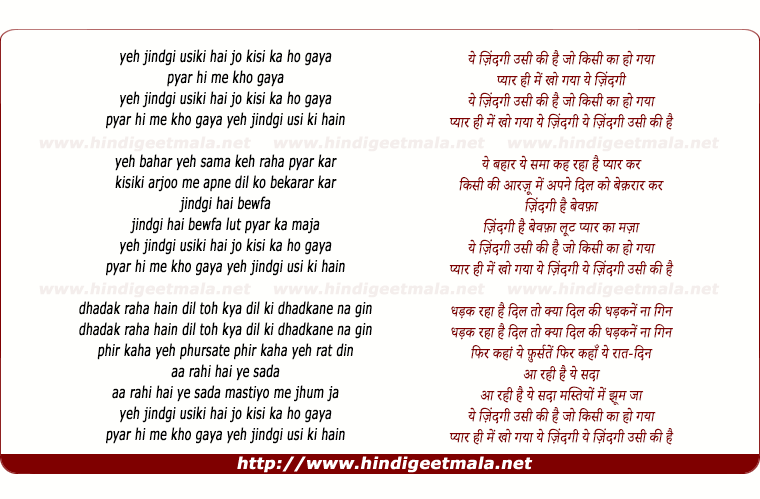 Comments on song "Ye Zindagi Usi Ki Hai, Jo Kisi Ka Ho Gaya, Pyar Hi Me Kho Gaya"
jonnyp on Sunday, July 12, 2009
1. I really LOVE to listen to this beautiful song again & again, as I am doing so, right NOW !
2. Everybody who was connected with this song one way or the other, whether he/she was the composer, a writer or the singer, really did a superb & a commendable job. 3. All of them will be long remembered, till each of them are still living or till any of us, who LOVED IT in the past or who still LOVE to listen to it, are STILL ALIVE. 4. A great haunting music; that's all I can say at this moment.

sanjaydole999 on Sunday, May 03, 2009
This song is the favorite song of Lata ji . When she turned 50 a pole was conducted to decide her best . As per Lata ji this is her most favorite . this song has music by C Ramchandra , ( R Chitalkar) the pole was conducted by loksatta . chandrika keniya was education minister under Shankarrao Chavan Father of present chief min Ashokrao Chavan . Mangesh Mhaskar a boy from Mumbai slam stood first in Matric exam that year , may be 1983 or 1982.
ananthu1996 on Tuesday, January 13, 2009
That is Bina Rai,she acted in Taj Mahal with Pradip Kumar and music composed by the great Roshan Lal Nagrath . Anarkali's music was by another great composer C.Ramachandra. Premnath the brother-in-law of Raj Kapoor married Bina Rai.Their marriage was the greatest Bollywood marriage ever,much greater than Aiswarya Rai Abhishek marrage. Two special trains were run from Madras and Calcutta for that event. Premnath used to play hero those times.
deepikaV1 on Tuesday, March 03, 2009
love this song its sung my lata mangeshkar.
This is original story of anarkali.
This is real story.
Bena Rai is amazing actress.
Mugal e azam of Madhubal's is like mixture.
its like India Masala.

Ppl make fun of Anarkali but its a really serious story happened in history.

Mahathma Gandhi is gr8 caz he told abt non-voilence


biyer08 on Thursday, January 29, 2009
Bina Rai was very beautiful and a great actress.Her acting career was cut short by her marriage. She made her debut in Kishore Sahu's "Kali Ghata" who intrduced her to films,another new comer in that film was " Aasha Mathur" another stunning beauty! Aurat is another of Bina Rai's memorable film.
View all 213 comments related to song Ye Zindagi Usi Ki Hai, Jo Kisi Ka Ho Gaya, Pyar Hi Me Kho Gaya
Popular Links on HindiGeetMala