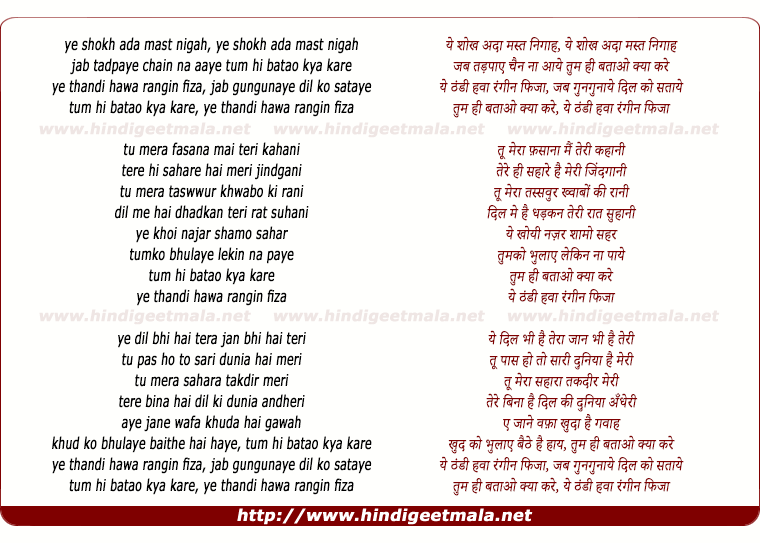 Comments on song "Ye Shokh Ada Mast Nigah"
Parag Sankla on Wednesday, February 24, 2010
Yes, Shaminder seems to be inspired by Talat sahab and sings in a soft
melodious voice. The song, as you have rightly mentioned, is very soothing
and pleasing. Like a moonlight night with a pleasant breeze on the beach..

rumahale on Saturday, June 28, 2014
I have enjoyed listening the song and reading very interesting and
informative comments; both singers sound heavenly - rare treat indeed.
Thank you for the best initiative.﻿

Parag Sankla on Wednesday, November 17, 2010
@ajitchahal58 Ajit ji, many thanks for sharing this information with us.
Please do send us picture of Shamider ji. I have sent a message to you.
please respond. Thanks

ajitchahal58 on Wednesday, November 17, 2010
oldHMfan,Thankyou ever so much for uploading this song of Bhai Shaminder and Geeta Dutt.Bhai sahib was my (late)husband's youngest uncle.The family was very old and wealthy and it is right Bhai Sahib wanted to sing with Lataji as this was his hobby and not a profession and he did sing with her.Sardul Kwatraji was an excellent musician of his time and later became a family friend.Bhai Shaminder passed away more than two decades ago.I have his picture,he was a very handsome man.
View all 7 comments related to song Ye Shokh Ada Mast Nigah