Video of this song from youtube
Average Rating : 4.48
Total Vote(s) : 95
Please rate this song between 1 star and 5 stars (5 stars being the best). Just move your mouse on the stars above and click as per your rating. Your rating will really help us to improve our website. 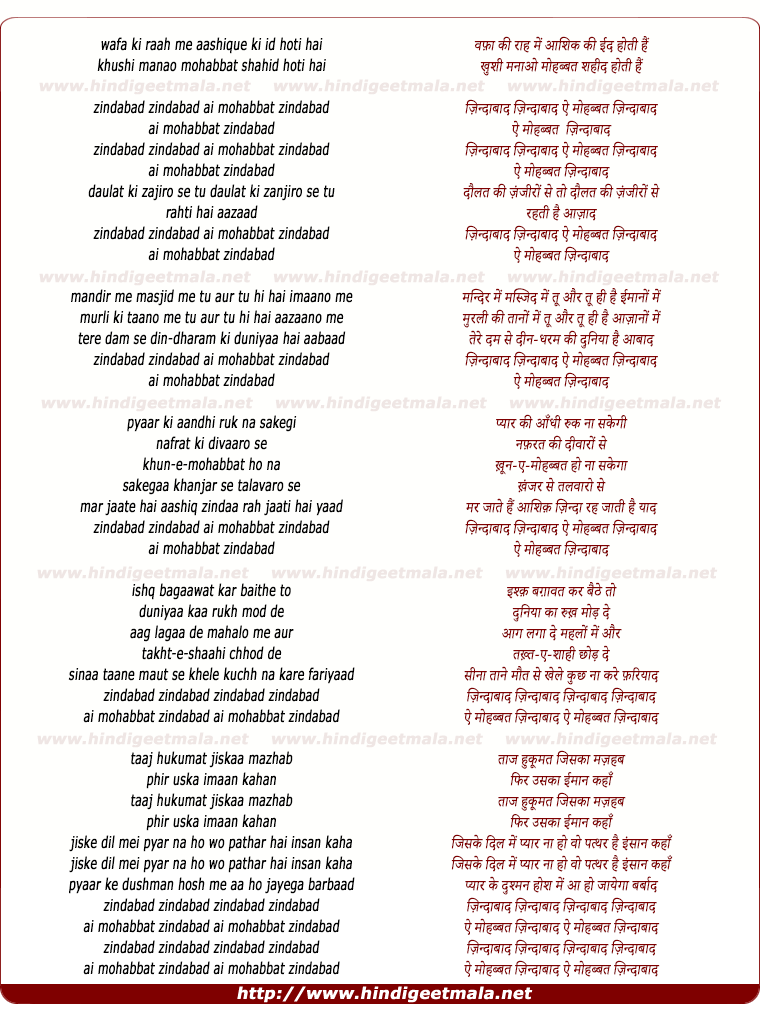 Comments on song "Zindaabaad Zindaabaad Ae Muhabbat Zindaabaad"
Narender Kumar on Tuesday, March 04, 2014
kumar sahab as sangtrashan,prithiraaj sahab as akbar and dilip as
saleeb,ajeet, madhu,duga what an actors and actress managed by k.asif.
some masterpiece give by producers and directors in every 10 years
from 1913 to till date- 1931-1940 achoot kanya,1951-1960 mughal e
azam,shree 420
1961-1970 waqt,naya daur and so on.﻿

Priyansh Doneparthy on Friday, March 02, 2012
One gets a weird feeling when Rafi sahab sings the line "woh pathar hai
insaan kahan". I have never listened to any other song in which he went to
such high notes. This song exhibits Rafi sahab's talent. This song fills up
energy in a lazy person.

Vasant Pusalkar on Thursday, June 30, 2011
Rafi was great yaar ! thanks for uploading this song. The old man is Kumar.
He was hero of Mehboob;s directed film- Al Hilal in 1935 and Mehboob;s
first produced film - Najma in 1943. He acted in several films. His acting
was natural.

dilawar6600 on Thursday, October 06, 2011
Mr Pritviraj Kapoor had created an image of Akbar e azam , Mr dilip kumar as a Prince Saleem and the beautiful Madubala as Anarkali . now no one can take place ...
View all 64 comments related to song Zindaabaad Zindaabaad Ae Muhabbat Zindaabaad
Popular Links on HindiGeetMala