Average Rating : 4.49
Total Vote(s) : 452
Please rate this song between 1 star and 5 stars (5 stars being the best). Just move your mouse on the stars above and click as per your rating. Your rating will really help us to improve our website. 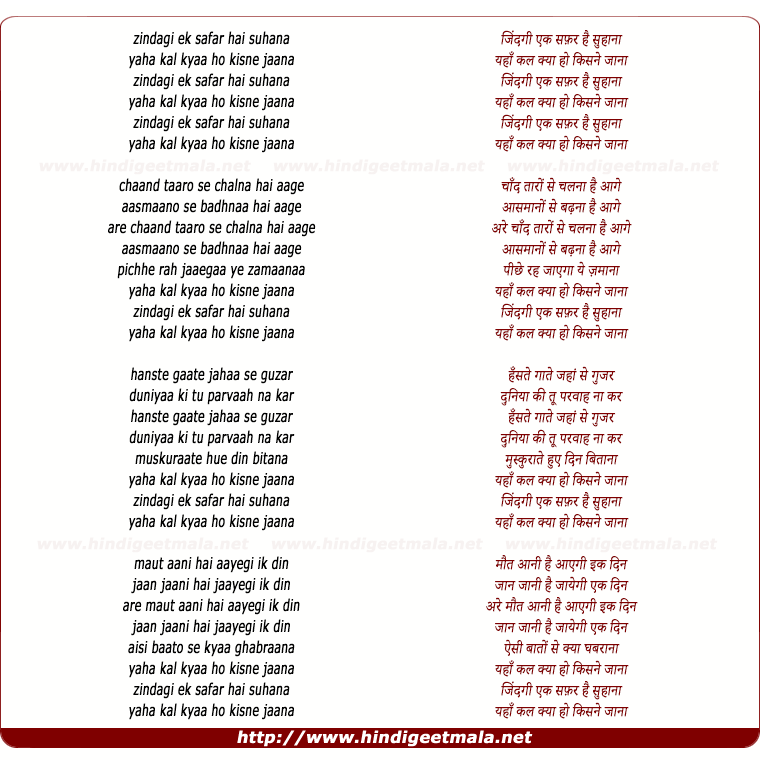 Lahoreumar on Tuesday, December 14, 2010
Cameo role of Rajesh Khanna in Andaaz was enough to lure the audience into
euphoric frenzy. Rajesh was the sensation of the time and this song
propelled interest of the audience into action. The wording is lively and
the acting is vivacious. Superstar lived for less than an hour in the movie
and in real life also, he retained his charisma for not more than five
years, i.e. from 1969-1973. His screen presence faded quickly in
mid-seventies and the angry young man (Amitab) grabbed the opportunity.

1arshiakhan on Sunday, October 10, 2010
Beautiful song. Completely bring back to 70s! That perfect 70s hair,
make-up everything! This is one of my most favorite films as it have the
very gorgeous Hema Malini and of course the handsome Rajesh Khanna with his
70s hairs in a special appearance and last but not the least our most
favorite crazy lover boy Shammi. Every song in this film was magically
composed by the duo Shankar Jaikishan. I guess one of the best Bollwood
film ever. Thanks a lot dear Jemal for posting this beautiful song.

Life is a journey... a pleasant journey
only if you are here and now

-without being anxious too much about
what happens tomorrow

-without taking to heart
what other say about you

-without losing the enthusiasm
to go beyond the stars

-without losing the smile
come what may

(Not an exact translation of the song.. just my twist after listening to
the song.Such a cheering song, sung and acted out beautifully - DP)﻿

ANU VIKSHAT on Wednesday, November 07, 2012
An only romantic song with the word Zindagi..as other song like Zindagi ka
safar hai yeh kaisa safar...,zidgi ke safar me guzar jaate hai jo
makam..,Zindagi kaisi hai paheli..all are serious one.This enjoyable
and romantic song is.written by king of romance Hasrat
jaipuri.ji...actually.this song had only made Rajesh Khanna as
romantic hero as otherwise he was tragedy king..like in Safar and Anand