Video of this song from youtube
Average Rating : 4.43
Total Vote(s) : 1207
Please rate this song between 1 star and 5 stars (5 stars being the best). Just move your mouse on the stars above and click as per your rating. Your rating will really help us to improve our website. 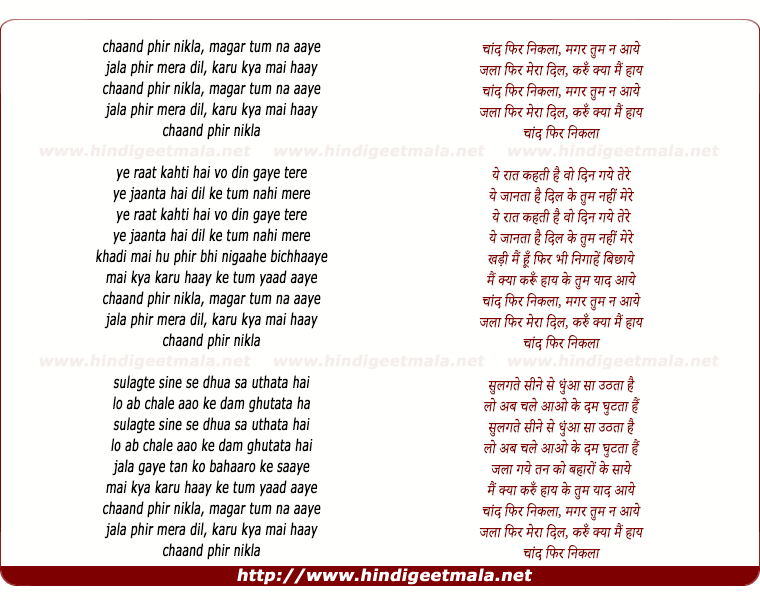 Comments on song "Chand Phir Nikla, Magar Tum Na Aaye"
crazyoldsongs on Friday, December 11, 2009
beautiful poetry by the great lyricist majrooh , adorned by the sublime
composition of the versatile genius sachin da and rendered by our beloved
lataji who is saakshaat saraswati herself , combined with picturisation on
talented and natural artist nutan produces an immortal gem that can be
heard endlessly .! so many good comments have been given but there is
hardly anything left to say

pushpinder paul on Sunday, August 10, 2008
Divine Melodious Queen - Lata ji What more needs to be said? God has given
such a beautiful gift to this world. She has touched billions of lives.
Thank God for the technology, and this precious voice is now captured on
media and future generations will also be blessed with her magic. God bless
you, Lata Ji. Thank you for your contribution to this world.

nandu1f on Friday, April 23, 2010
@paradigmnnf True, but I did not realize that it has even infected Hindi
popular music industry, which allowed the great artists to shine. Of course
there is always some politics and "influence" in any endeavor.

prabhakara rao Edara on Tuesday, November 09, 2010
I like this is a song so much, the expressions of Nutan, the greatness of
liric, the composition of the song ARE superb. This song alone have brought
glory to sad songs in the industry - Prabhakara Rao.

graphikamaal on Tuesday, September 02, 2008
One of my most favourite song, both singing and music, specially the prelude and interlude parts are my most favourite. First time watching the video, Nutan takes this song to higher altitudes.
View all 149 comments related to song Chand Phir Nikla, Magar Tum Na Aaye
Popular Links on HindiGeetMala