Video of this song from youtube
Average Rating : 4.50
Total Vote(s) : 142
Please rate this song between 1 star and 5 stars (5 stars being the best). Just move your mouse on the stars above and click as per your rating. Your rating will really help us to improve our website. 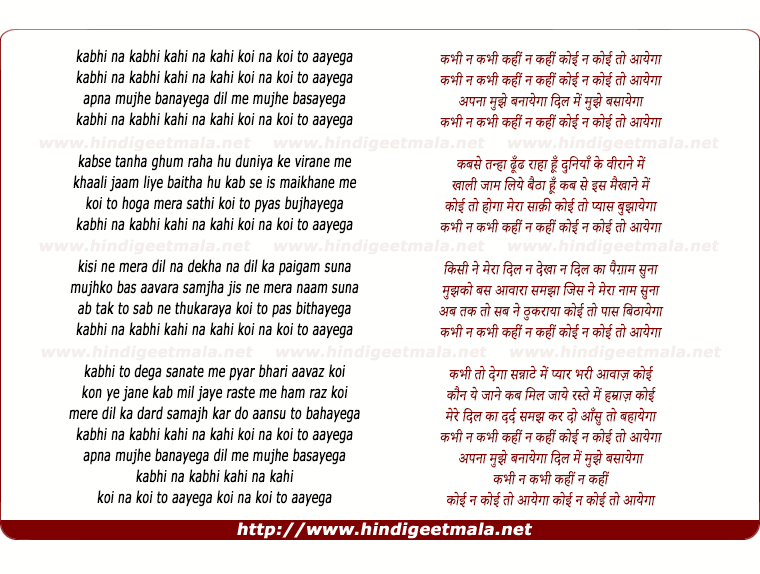 Comments on song "Kabhi Na Kabhi, Kahi Na Kahi, Koi Na Koi To Aayega"
crazyoldsongs on Sunday, December 05, 2010
this very old song used to be played on the urdu service of air ,very often
and i used to adore rafi's rendition . i was a vey small kid and when we
used to play'' antakshri '' with our friends ,and had to sing a song
starting with k , this was always the first song that would come to my mind
! madanmohan 's outstanding composition has brought out one of the best
renditions from rafi ! thanks yuan for my fav childhood song !

mialvi9 on Sunday, September 13, 2015
Rajinder Krishan has brilliantly captured the emotions of a man who drowns
himself in wine to forget a world that hasn’t been kind to him. Madan
Mohan’s composition provides the perfect platform for the lyrics. And Mohd.
Rafi does the rest. The way he mixes sadness and drunkenness in his voice
is simply amazing. A masterpiece!﻿

VK malik on Tuesday, April 21, 2015
That was self pity > U got to respect yourself first before some one comes
to u > otherwise all in vain !! music crafted by MASTER M M ji﻿