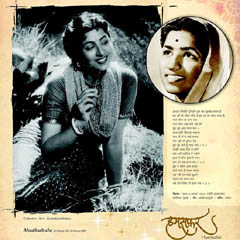 Lata Mangeshkar in her calender "Humsafar" about Madhubala:

Madhubala was a beautiful gift to the Indian film industry. She was extremely beautiful but was a talented natural actress and was blessed with a lovely smile.

I was recording the song Aayega aanewala for the film Mahal. Music Director Khemchand Prakash told me that the actress on which this song would be filmed will not be seen on the screen. It will just be a glimpse or a shadow of her. For that very reason, they wanted an effect which complements the suspense and the mystery of this situation.

I had to sing the prelude Khamosh hain zamana and make it sound like this voice is coming from a distance. Once this is done, the timing of Aayega aanewala had to be spot on. It was then decided that I will stand 25 steps away from the microphone and start singing walking slowly towards the microphone. This take was okay after a lot of attempts.

The studio was full of dust and finally the song was recorded. This song went on to create history and Madhubala was a witness to this happiness. But I met her after some time as both of us were busy with our work.

I saw her once as she was leaving the studio. She was wearing a brown coloured dress and was a scarf. Along with youth and beauty she now also had success and popularity after Aayega aanewala. I was extremely busy and did not have a moment to spare. The sublime beauty greeted me and proceeded elegantly for her work.

The period after that was very busy both for me and for the actresses. We used to meet and converse. Madhubala used to mention explicitly in her contract that she needed the voice of Lata Mangeshkar as her playback. I believe Saira Banu and Meena Kumari had similar clauses in their contracts.

Madhubala had invited me for dinner as well. I have good memories of the song Pyar kiya to darna kya from the movie Mughal-e-Azam. Anarkali's voice echoes through Sheesh Mahal had her reflection is seen on the mirrors. The Music Director Naushad had asked me to overlap the Alaaps in this song.

This song is the central theme of the movie. The movie was black and white while this song is shot in colour. The movie was a hit. Madhubala was suffering from heart ailment during that time. Some scenes were shot using dummy artistes and Madhubala is seen as an image.

I was the playback singer for her last film Jwala. Youth and beauty are short lived but the impression that Madhubala has left on the silver screen still stays intact and just like her...beautiful!
Popular Links on HindiGeetMala