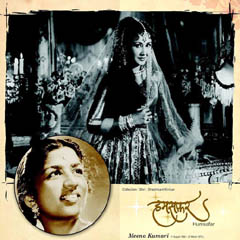 Lata Mangeshkar in her calender "Humsafar" about Meena Kumari:

She was the tragedy queen for Hindi films. She was also a sensitive poetess, blessed with simple yet graceful beauty more like the lead female characters from Sharat Chandra Chaterjee novel.

Meena Kumari started as a child artist in mythological films. But it was the movie Baiju Bawra which gave her the real break. My songs in that film were very popular.

Meena Kumari was tailor made for specific roles. She was a quintessential Indian woman. Due to this reason, the characters of a dedicated wife, lover, mother and a sister in law were portrayed by her in a very convincing manner. These were very well received by the audience as well. I loved her measured and graceful movements, the emotive dialogue delivery and when she dressed in a Bengali Saree.

I liked her roles in the films Dil Apna Aur Preet Parayi, Dil Ek Mandir, Aarti, Bhabhi Ki Chudiyaan. Films like Kohinoor and Azad were pure entertainers which were hits,but Meena Kumari was the epitome of serious and sensitive mode of acting.

Meena Kumari was an admirer of my songs. She used to discuss her favorite songs with me.

Bimal Roy had offered Meena Kumari a guest role for the movie Do Bigha Jameen. He wanted a lullaby for this movie and this was to be without any musical instruments. This was Music Director Salil Chaudhary's first movie in Mumbai. I suggested to Salilda that the sound of the organ should come from the headphone and I would take care of the rest. It was a challenge to sing songs of that kind. But it is after this hard work that a melodious song like Aa ja ri nindiya tu aa was born.

I sang for Meena Kumari for the film Pakeezah. She was very ill during that time. The film was released which was accompanied by the sad news of her death. Indian film industry lost a sensitive actress.
Popular Links on HindiGeetMala