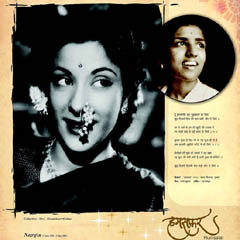 Lata Mangeshkar in her calender "Humsafar" about Nargis:

Nargis will always be remembered as a talented, beautiful and a popular actress on the silver screen but also as a homely woman with a pleasant personality who took up a lot of social work during her lifetime.

I still remember our first meet. I had finished recording for the film Mahal. Nargis and her mother, the famous singer Jaddanbai, were sitting outside the studio. Jaddanbai praised my rendition of the song that was just recorded and asked me my name.

She said, "You are the daughter of Master Dinanath."

She used to know my father, Master Dinanath who was a famous actor and singer of the Marathi Theatre. Jaddanbai was particularly impressed with my pronunciation of Urdu words. Nargis was ready with her makeup for the shooting of the movie Lahore for which I had given playback.

In the year 1949, films like Andaaz and Barsaat were released. My songs in those films as well as Nargis's performance were highly appreciated and became immensely popular. After the film Awara, Nargis used to attend my recordings. We started conversing and established a close bond.

I still remember the recording of the song Ghar aaya mera pardesi. The recording started at 9:30 in the morning and finished at 3:50 AM next day! Raj Kapoor and Shankar-Jaikishan took every effort to make it perfect. Once the recording was over, all of us were tired. Nargis had prepared sandwiches for all of us. It was a nice gesture from one of the leading actresses of those days.

Nargis got married to Sunil Dutt in the year 1957. She took a break from films and got busy as a housewife. She was involved in social work. She worked for Sunil Dutt's production house, Ajanta Arts. I have given playback for her film Raat aur Din which was completed by Nargis after hard work and diligence. This film was completed after her marriage.

Nargis's journey from an actress who dazzled the silver screen to a content housewife was witnessed by me. Her untimely death has left a lasting imprint on me.